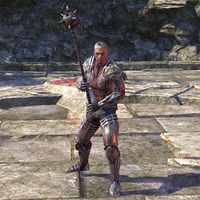 Sun Mages (or Suncasters) are a class of hostile humanoid NPCs that attack using melee and magical abilities. They are usually equipped with a two-handed sword, battleaxe, or mace. The class was introduced in Update 20, but it became more common in Dragonhold.

Their weapon becomes covered in flames before they repeatedly strike their target.

Two miniature suns appear on either side of the Sun Mage and move towards their target.

A circular AoE appears at the target's feet.

This Elder Scrolls Online-related article is a stub. You can help by expanding it.
Retrieved from "https://en.uesp.net/w/index.php?title=Online:Sun_Mage&oldid=2352008"
Category:
Hidden categories: