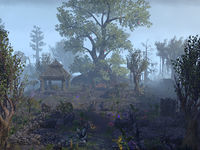 Root-Whisper Village is an abandoned village located in Murkmire. It was previously the home of the Root-Whisper Tribe which was destroyed during an incursion of Barsaebic Ayleids from the north. However, the tribe protected their souls from being taken by placing them in the Remnant of Argon—at the cost of their Hist's health, leading it to go to sleep. The village and its Hist became just another story from Murkmire.

After the events of By River and Root, the Hist is reawakened and the village becomes the home of the reborn Root-Whisper tribe. This new tribe is made up of both members from the Bright-Throat and Dead-Water tribes, as well as others—including lukiuls who have been drawn to the village. As both the tribe and village are being re-established, they are always looking for assistance.

It is nestled between the twin temples, Xul-Thuxis and Vakka-Bok, suggesting that in pre-Duskfall times it was an important place. 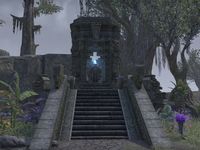 Root-Whisper Wayshrine can be found inside the village.

This Elder Scrolls Online-related article is a stub. You can help by expanding it.
Retrieved from "https://en.uesp.net/w/index.php?title=Online:Root-Whisper_Village&oldid=2505742"
Categories:
Hidden categories: