Speak once again to Lady Almalexia in the Temple who now believes that you are the Nerevarine (even if you haven't finished the main Morrowind quest). She tells you a story of two blades, Hopesfire and Trueflame. Hopesfire has been kept safe with the goddess, however its twin blade was lost at the battle of Red Mountain. The blade was shattered into three pieces, one of which Almalexia gives to you, and the other two which you must find in order to complete the blade. The goddess suggests asking around those knowledgeable in the city for further guidance in finding the blade pieces and having them reforged.

Finding the craftsman to forge the three pieces is relatively easily. Most people will point you in the direction of Yagak gro-Gluk in the Craftsman's Hall of Godsreach. Yagak gladly volunteers to combine the pieces but has no information about the location of the remaining two. 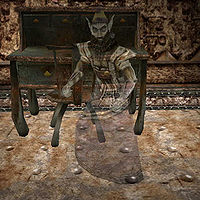 Finding someone who knows about the pieces is difficult, but remember Almalexia's hint of speaking to people you've used for guidance before. Queen Barenziah is one of those people and directs you to speak with Karrod, Helseth's bodyguard which you defeated earlier in a duel. Indeed, speak with Karrod about the blade pieces and he'll actually give you one which his father handed down to him when he was young.

Note: In order to speak to Karrod, you must have dueled with him in Helseth's Champion. If you want to skip those quests, you'll find the Odd Dwemer Weapon on Karrod's body, but attacking him will cause the whole Royal Guard to come to his defense.

Note: There is a bug that prevents Karrod from giving you the piece if you do the main quest in strange order. If this happens, you can give yourself his piece with the console command player->additem "bladepiece_01" 1

Next, speak with Torasa Aram in the Museum of Artifacts in the Godsreach district. Though she says she doesn't have the third piece, she does have a shield from the same period which she can part with if you make some artifact donations to the museum. You will have to donate (not sell) two artifacts to the museum and you can read the book lying on the bench on the south wall of the museum entrance to see which ones you can donate. Some items listed in the book, such as the Ring of Khajiit or the Masque of Clavicus Vile, cannot be sold despite being genuine artifacts.

That is a large list, and you may have left or sold most of these back on the island of Vvardenfell, or if you do have any of them you are most likely using them. The Robe of the Lich, Mace of Slurring and the BiPolar Blade are items with fairly useless enchantments and are found in the expansion, making them ideal candidates for donation. Don't worry too much about it; if you are very stealthy, the items can be stolen directly off of their podiums later. If you choose to do this, do not attempt to sell/donate them back to Torasa, as she will recognize the stolen item and call for the guards, and never accept artifacts from you again.

With any two donations you receive the Dwemer Battle Shield. Torasa mentions that the spike on the front of the shield is loose but that most smiths would be able to repair it. 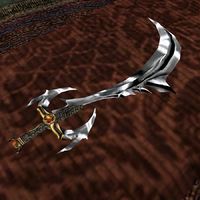 Return to Yagak gro-Gluk in the Craftsman Hall of Godsreach with your three items (Odd Dwemer Weapon, Dwemer Battle Shield, and Broken Dwemer Blade Piece). Talk to him about the Dwemer Battle shield and he'll separate the third blade piece from the otherwise regular Dwemer shield. Then talk to him about forging the blade and he'll take the three broken blade pieces and tell you to come back in two days. Indeed, after two days he'll give you the finished blade though without any enchantments on it (he says to see a Dwemer if you want it enchanted).

Now you have to enchant the blade, as Yagak had mentioned. If you pester Yagak further and ask him about the talk to a Dwemer topic, he'll suggest that you return to Bamz-Amschend. If you return to Almalexia at this point, she will tell you to return to the one who forged the blade to get it enchanted. Follow Yagak's advice and re-enter the Dwemer ruins. You'll want to travel back to Radac's Forge and find the ghost of Radac Stungnthumz now wandering the middle-East area next to the large robot. Radac will tell you to return to him some Pyroil Tar in order to enchant the blade. The Tar can be found deep within the Daedric Shrine of Norenen-dur in the Citadel of Myn Dhrur. There are three Pyroil Tars that you can find and any will work.

Return to Radac with the Tar and he'll enchant the blade for you.

Return to Almalexia to receive her congratulations for reforging the blade. Speak with her again to receive the next quest.