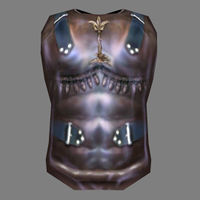 The Ebony Mail is a breastplate created before recorded history by the Dark Elven goddess Boethiah. It is she who determines who should possess the Ebony Mail and for how long a time. If judged worthy, its power grants the wearer added resistance of fire, magicka, and grants a magical shield. It is Boethiah alone who determines when a person is ineligible to bear the Ebony Mail any longer, and the goddess can be very capricious. —Yagrum Bagarn, Tamrielic Lore

The armor is obtained via a high ranking quest for the Tribunal Temple. See the Ebony Mail quest for more information.