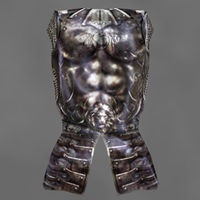 The Lord's Mail, sometimes called the Armor of Morihaus or the gift of Kynareth, is an ancient cuirass of unsurpassable quality. It grants the wearer power to absorb health, resist the effects of spells, and cure oneself of poison when used. It is said that whenever Kynareth deigns the wearer unworthy, the Lord's Mail will be taken away and hidden for the next chosen one.

The Lord's Mail is a legendary armor artifact which is precious to the Imperial Legion. The deserter Furius Acilius is suspected in its disappearance, and is thought to hide in the Underground Caves below Ebonheart. See the Lord's Mail quest for more information.