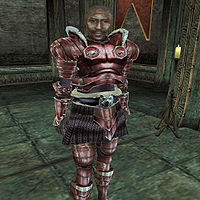 Karrod, a Redguard warrior, is King Hlaalu Helseth's Champion. During the Main Quest, you are required to defeat Helseth's Champion in order to gain the King's favor. After the fight, Karrod is thoroughly impressed by your performance and gives you his sword, which was handed down by his father. This ancient weapon becomes very useful when Almalexia wishes to reforge The Blade of Nerevar to recreate Trueflame.

It isn't difficult to see how Karrod rose to become Helseth's Champion. He has unusually high stats for an NPC, with 150 Strength and 120 Speed. Like all Redguards, he has a natural resistance to poison and disease, and can boost his health, strength, agility and endurance for a short period of time. Aside from this, he possesses a set of extra Constant Effect abilities:

Despite all these abilities, Karrod does very little damage, though he can withstand a lot of punishment himself. This is mainly because of his sword which, while exotic, does less damage than most mid-tier weapons.