The UESPWiki – Your source for The Elder Scrolls since 1995
< Tribunal: Places: Daedric Shrines
Jump to: navigation, search 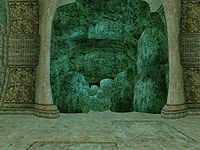 Blast through this rockfall to enter Norenen-dur

Norenen-dur is an underground Daedric shrine hidden deep beneath Mournhold. It can only be reached by blasting out a wall in Bamz-Amschend using a Dwemer Satchel Pack. You will need to enter the ruins in order to obtain a bottle of Pyroil Tar during The Blade of Nerevar. There are 6 sections. 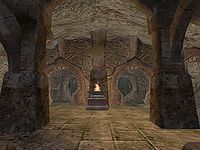 Near the entrance to Norenen-Dur 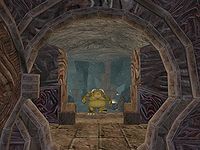 It's not uninhabited, however

1.Norenen-Dur - The main section has two branches, leading to The Grand Stair and The Teeth that Gnash. There is not much here of note. 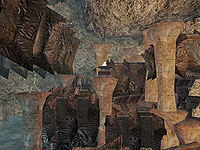 The Grand Stair is teeming with enemies

2.The Grand Stair - Reached from the left-hand door from the entrance to Norenen-Dur, this is a large spiral staircase to nowhere. There is absolutely nothing of value here beyond the various enchanted arrows from the Skeleton Archers present along the path. This section is entirely populated by undead, instead of the Daedra found in most of the rest of the shrine. 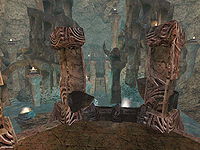 The Teeth that Gnash

3.The Teeth that Gnash - This section serves mainly as a passage from the entrance area to the Citadel of Myn Dhrur. On the east side of the lake are three deposits of Raw Adamantium. A fourth one is in the middle of the lake. 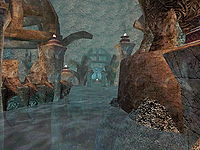 The Citadel of Myn Dhrur

4.Citadel of Myn Dhrur - The citadel is the home of Khash-Ti Dhrur, a unique Dremora Lord. He carries one bottle of Pyroil Tar, needed in order to forge Trueflame. This section also has doors to the Basilica of Divine Whispers and The Wailingdelve. 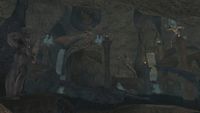 The statue of Boethiah in the Basilica of Divine Whispers

5.Basilica of Divine Whispers - This area contains large statues to all of the Daedra lords worshipped in Morrowind, and a trio of Atronachs of each variety. 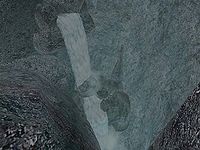 The waterfall central to the Wailingdelve

6.The Wailingdelve - This is the real treasure trove of the shrine. The entrance is in the ceiling of the Citadel of Myn Dhrur, you need to levitate up. It is a long, mostly vertical drop down to a small underground lake. Halfway down, you will find some real loot - most notably a Daedric Cuirass and Daedric Left Pauldron, the only examples of these you can find without doing horrible things to kindly old wizards. As well, you can find 2 bottles of Pyroil Tar, a Glass Left Bracer, a Dwemer Pneuma-Trap battleaxe (one of only 2 in existence), a copy of the Marksman skill-book, The Black Arrow, Volume II, a Greater Soul Gem which has already the soul of a Frost Atronach trapped inside, and a few lesser items. An interesting side-note, there is another vertical passage going up from where you enter this area, leading to a small ledge at the top of a tall chimney. There is nothing up there, however, it would've been a good hiding place. 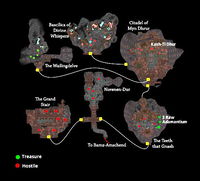