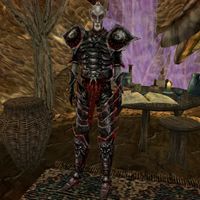 Divayth Fyr is an ancient Dunmer sorcerer who is the caretaker of the Corprusarium and the only person in the game who can cure your Corprus disease, acquired during the Main Quest. He is a member of Great House Telvanni, though he generally stays out of House politics. Although he is the oldest and one of the most respected members of the House, he is not a member of the Council, and has no intention of joining. He can be found at the top of Tel Fyr, his personal tower, where he lives with his four "daughters", who refer to themselves as his "wives": Alfe, Beyte, Delte, and Uupse. Divayth later reveals they are actually female clones of himself. He appears to be the oldest mortal character in the game–according to Alfe Fyr, who says that he is 4000 years old.

In addition to his key, Divayth has a full set of Daedric Armor, except the helmet. It is a token of his long life, as well as several ancient artifacts, including Scourge and the Cuirass of the Savior's Hide. His armor contains the only Daedric Pauldrons and the only unenchanted Daedric Cuirass in Vvardenfell. Unfortunately, you cannot directly obtain them from him without a fight. Killing him is an extremely bad idea, as he is essential for a major section of the Main Quest. Instead, you can acquire them by casting Disintegrate Armor on him repeatedly until they break, casting Calm Humanoid to stop him from attacking you, and pickpocketing the broken armor off him and repairing it, or you can simply kill him once the main quest line is completed. This is the only way to acquire a complete set of the armor without both the Tribunal and Bloodmoon expansions installed.

Fyr is also likely to be the second most knowledgeable person in the game, falling just behind Yagrum Bagarn. Along with him, he can teach you about the Dwemer and Corprus Disease. He takes a deep interest in their history, as is evident in his workroom, where you may find many Dwemer artifacts, not to mention the Corprusarium beneath the halls of his tower, which he considers a "hobby". His luxurious care of Yagrum Bagarn, the last living Dwarf, is also a testament to his pursuits.