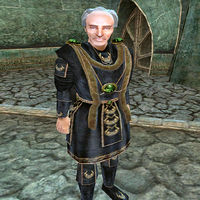 Plitinius Mero, an Imperial savant, is an author in the employment of Barenziah. This may seem strange, since Plitinius wrote The Real Barenziah, a book that uncovers a seemingly darker side of Barenziah's past. However, it appears that they became friends after the book was published, and that Plitinius was in fact a scribe for Barenziah. Plitinius is very knowledgeable about the happenings of the Royal Court, and this does prove helpful in the Blade of Nerevar quest.

"Plitinius Mero" is actually an alias; after writing The Real Barenziah, he had to assume a false name to escape persecution by the Imperial family.

He wears an expensive shirt with matching pants and shoes, and a dire shardbolt ring. He wields a silver dagger, and he carries four exclusive restore health potions and a large amount of gold. Aside from his natural charm and ability to absorb fatigue from others, he knows no spells.