The UESPWiki – Your source for The Elder Scrolls since 1995
< Tribunal: Places: Dwemer Ruins
Jump to: navigation, search

Sotha Sil at the heart of his city

The Clockwork City is the great city of Sotha Sil, only accessible by teleportation.

It is only accessible through Tribunal's Main Quest and by using Barilzar's Mazed Band. Despite its name, the Clockwork City you experience here isn't really much of city, since it is mainly indoor tunnels half-filled with water and machines of Dwemer-inspired designs. The tunnels are also crawling with Fabricants envisioned by Sotha Sil.

When Almalexia teleports you to the Clockwork City in The Mad God, if you look behind you, you'll see a door which has been destroyed and blocked by a cave-in. This is obviously a passage that used to link the explorable area with the rest of the city. 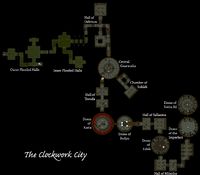 Full map of the Clockwork City 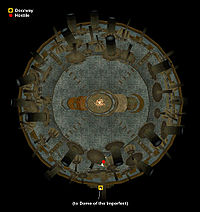 Map of the Dome of Sotha Sil
Retrieved from "https://en.uesp.net/w/index.php?title=Tribunal:The_Clockwork_City&oldid=1877463"
Categories:
Hidden categories: