Tribunal:The Shrine of the Dead

After your last quest from Fedris Hler in the Temple's Reception area, you are directed to see Lord Archcanon Gavas Drin in his office located close to Hler. Offer to provide service to our Lady and Gavas will tell you about the Shrine of the Dead found below in the Temple's sewer system. The Shrine has become corrupt with Undead over the years due to neglect and Drin would like you to cleanse it. Ask him about the Shrine of the Dead at least twice to receive directions to it and be sure to talk to him about the must be cleansed topic in order to learn that you will have to escort the Priest Urvel Dulni and protect him until he can cleanse the shrine. Urvel is standing in the same room as Gavas and you must speak with him in order to arrange the escort. It is a good idea to explore and clear the way as much as possible, before you escort him though (unless you like the extra challenge). 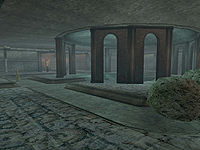 Finding the Shrine of the Dead[edit]

Following the directions given to you by Gavas, enter the Temple basement found north of the Temple's Hall of Ministry. From the basement, with all the Kwama Eggs you could possibly want, it's a short trip down into the Temple Sewers. You can explore the area and find a few things including Variner's Ghost, which is part of a miscellaneous quest. The four deadly members of the Black Dart Gang in the West Temple Sewers (and the one member in the East Temple Sewers) are part of this quest as well. The Abandoned Crypt entrance here appears to be a dead end; although, there is a much larger area beyond the path blocked with rocks (the rocks are cleared at the beginning of the next quest for Almalexia.) There is a possible glitch here though, where by jumping at the rocks for a while, you can actually get into the main area. Once in, the rocks remove themselves so you can get out. When you've finished exploring, head on to the East Temple Sewers.

The East Temple Sewers contain a similar collection of Undead of varying levels, but nothing is as difficult as some of the Goblins that you've encountered previously. There are several areas that branch off from this area and some of them are quite interesting. In the Temple Catacombs for example you can find 3 samples of Adamantium ore. Another 10 samples can be found in the Temple Crypt. Remember to save before to mine them, to be sure to get all the minerals. You can continue to the Temple Gardens from the north end of the East Temple Sewers and, from there, to the Temple Shrine at the south end of the Gardens. You can also reach the Shrine area from the Temple Catacombs. The areas involved in this dungeon are: 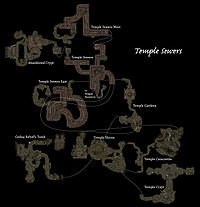 Map of the Temple Sewers

Gedna Relvel's Tomb is an interesting area that has a closed stone door which is easily missed if you are not careful in your search. The secret doors are opened by standing on the stone in front of the doors, but you must be involved in the Crimson Plague before they will activate.

The Shrine area is the one you were sent to clear. There are a number of Profane Acolytes guarding the 'red' light room which you must kill (you receive a journal entry when you kill them all). Be careful with them, because they almost always summon Greater Bonewalkers, which can Damage Strength and Endurance. If you left Priest Urvel Dulni back in the Temple, you will have to go and retrieve him in order to complete the cleansing of the shrine. Like most NPCs you may want to keep him in sight lest he get lost, trapped, or killed by any undead that reappears in the area. Once you get close to the shrine he will cleanse the shrine. You probably should be nice and escort him back to the temple.

Return to Gavas Drin in his office. If the priest is still alive, you will be rewarded with the Blessed Spear, whether or not you escorted him back. Offer your "service to our lady" once again to be directed back to Fedris Hler. Urvel will stop following you, once you speak with Gavas to finish the quest.