The UESPWiki – Your source for The Elder Scrolls since 1995
< Tribunal: Quests
Jump to: navigation, search 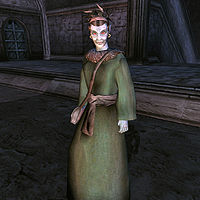 A Widow needs your help[edit]

In the Sewers of the Great Bazaar, you will encounter the Dark Elf woman, Narisa Adus, located in the western corner, close to the Manor District entrance. She will tell you how she and her lover, Variner, encountered the Black Dart Gang in the sewers. Variner was killed defending her and now his ghost haunts her at night. She asks you to help her by finding Variner's Ghost and pass on any message he might have.

The Temple Sewers can be reached via the Temple's Hall of Ministry, through the Basement, and a trapdoor into the Sewers. Variner's Ghost can be found near the center of this area and indeed has a message for you. It appears that the infamous Black Dart gang can be found in the Temple Sewers West. To make the task easier, Variner will tell you how to kill the gang by flooding the area via a lever that looks like a torch near the east end of the area near the gang. The ghost warns you not to get too close to the gang or you risk the same fate as himself. The entrance to the West Temple Sewers is in the same area northeast or so of Variner.

The gang's headquarters are in the west section of the sewers, and there are four members to be killed here. The Black Dart Gang member can easily be found within these areas as red-robed Dark Elves. You can kill them if you are stealthy, but their darts do pack quite a punch, so be careful. There is a second entrance which resembles a tunnel, that lends itself to this approach. Alternatively, the torch that Variner's Ghost mentions is just between the doors you entered when going to Temple Sewers West, so it's as far away from the actual gang as you can actually be. The switch will break after you push it, so you can't drain the water that fills the sewer again.

Return to Narisa Adus once you've killed or drowned all of the Black Dart Gang. She will thank you and reward you with Variner's Ring.