The UESPWiki – Your source for The Elder Scrolls since 1995
< Elder Scrolls Online: Places: Blackwood / Ruins / Delves
Jump to: navigation, search 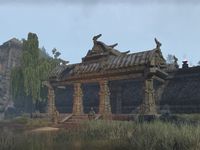 Xi-Tsei is a ruined xanmeer located in southern Blackwood. It can be found at the end of a broken bridge spanning a swamp, northwest of Stonewastes. Two braziers stand out front. A heavy sack can spawn beside the brazier on the right-hand side (facing the delve). Bog blights shamble amid the grave stakes in the bog just south of the delve, and a voriplasm wallows in the mire just northeast of the structure. A glowing frog stands just inside the delve's entrance.

Xi-Tsei is one of the Sul-Xan tribe's favorite ritual sites. You will need to help a traveler rescue her friends from being sacrificed during the related quest.

The entrance to the delve leads you to a stretch of open swamp. You'll find dragonflies, gas blossoms, static pitchers, lantern mantises, bog blights, and the occasional Argonian behemoth in the mire. In fact, there's a behemoth sleeping beneath a tree not too far down the path. The delve's skyshard is high up on a cliff northeast of this sleeping behemoth, and is accessible by traveling further into the delve. Hackwings fly overhead. Voriplasms wriggle around near the river's origin on the west side of the mire, and wallow beneath a bridge that passes overhead. The river spans from the northwestern corner all the way to the southeast. Hackwings also loiter on the ground near the river's origin, albeit out of the water. Glowing frogs, on the other hand, hop as close to the river as they please.

If you follow the river all the way northwest to its origin and climb the stone stairs just east of it, you will find a secondary exit leading out to Blackwood. An Argonian behemoth snacks on a dead haj mota atop the hill even further east of this door. A door located north of this behemoth leads into the xanmeer. Entering through this door brings you to the ruin's westernmost chamber, which is full of ravenous voriplasms.

You'll start to see Sul-Xan tribesmen at the bottom of the hill leading up the path to the south, a short ways from the entrance (which is on the east side of the map). During the quest, Kuran is being sacrificed at an altar here. There's a bridge crossing over the river at the top of the hill, bringing prospective explorers to the xanmeer. Entering the doors on the east or west side of the xanmeer brings you into the xanmeer's southernmost chamber.

A Sul-Xan Venom Archer, Champion, and Sunchanter are all located on the xanmeer's southern ridge, which is where the bridge connects.

There are plenty of pots to loot inside the xanmeer. The interior can be divided into two main sections: the southwestern half and the northeastern half. The east and westernmost rooms contain the doors from which you enter and exit the ruin. Centipedes and lizards creep across the ancient stone floors.

The westernmost chamber contains two voriplasms, one of which is feasting idly upon a dead behemoth. You'll head through the southeastern doorway to traverse the rest of the delve. A Sul-Xan Venom Archer patrols this hallway. From here, you can take one of two paths: you can head north to explore the northeastern half of the xanmeer, or you can head southeast to explore the southern half of the delve.

The easternmost chamber contains a sap-covered idol (sitting on the east side of the room), which the patrolling Argonian behemoth occasionally stands in front of to stare at with interest. You'll travel northwest to reach the hall beyond, which a Sul-Xan Champion patrols. As with the western chamber, you will have two directions to pick from: you can either head west to the southwestern half of the ruin, or you can travel northeast to reach the northern halls. A Sul-Xan Raider patrols the western path, and a static pitcher lies dormant at the corner near the stairs along the northern path.

A patch of ceiling in the westernmost hallway is leaking. A Sul-Xan Sunchanter resides here. The hallway connects to a rectangular chamber where a Sul-Xan Alchemist and Fearmonger are drinking together. A Sul-Xan Champion patrols the hallway leading east.

If you decide to enter from the easternmost hallway, you'll enter a rectangular room containing two benches situated in front of a campfire. A Sul-Xan Venom Arch and a Sunchanter are sitting around the fire, eating worms and bread. A glow bug skitters across the floor in this room, while a lantern mantis stands guard in the first corner of the hallway leading west. A pressure plate at the next bend (at the bottom of the stairs) activates a fire spout trap.

Both hallways lead to a large chamber where one of Jela's friends is being held captive. An Argonian Behemoth patrols the room. Jela's friend Last-to-Eat is on the north side of the room, which is guarded by a Static Pitcher, a Sul-Xan Champion and a Sul-Xan Alchemist. This northern room is full of stone sarcophagi.

Taking either of the paths on northeast and northwestern ends of the chamber will bring you to a looping hallway that diverges in the middle. This will bring you to an exterior platform where the delve's boss, Raj-Kaal Ioraxeek, resides. If you head down the eastern stairwell, you'll find yourself on the path to collecting the skyshard. Be wary of the lantern mantis guarding the skyshard. Just north of the landing at the bottom of the stairwell leading down from the Raj-Kaal's platform, you'll find a door leading back into the xanmeer.

During the quest, you will probably enter the xanmeer by crossing the bridge located near

If you take the path leading to the southern half of the ruin from the eastern side of the xanmeer, you'll notice the first hallway you pass through is trapped: a pressure plate causes darts to fly out of the wall when stepped on.

The next room is a fair-sized rectangular room with two decorative ponds inside. A Sul-Xan Venom Archer and a Sul-Xan Alchemist stand near the northeastern entrance to the room, studying a stone carving on the wall. A voriplasm wallows in the fountain pond on the south side of the room, and can easily be avoided, as the creature likes to stay close to the far wall. A glowing frog also resides in this room. There are three lit brazier's in the voriplasm's large pond. A Sul-Xan Raider and Champion patrol the hallway ahead.

If you decide to enter the southern half of the xanmeer from the west side of the ruin, you'll head down a flight of stairs into a rectangular chamber containing a gas blossom and two voriplasms, the latter of which are consuming a dead behemoth. There's a chest in the western corner of the room, sitting along the edge of the pond. Like the pond room in the opposite southern corner-hall, there are three braziers standing in the largest pond. However, unlike the other pond room, the braziers in this room have been extinguished. A solitary voriplasm patrols the hallway leading southeast from the room.

Beyond both of the pond rooms lies a hallway that loops around; you can head straight from the eastern path to enter the path leading to the westernmost room. In the middle of the hallway, the hall diverges into the large, southernmost chamber. At the crossroads between these three paths, there's a pressure plate that activates an ankle-high fire spout trap. The spout from which the fire erupts is affixed to the base of a stone altar. You'll find a basket, a pot, and the Sul-Xan Note on top of the altar.

Head south to enter the southernmost chamber. A Sul-Xan Alchemist and Sunchanter are standing on the east side of the room, inspecting the stone monolith in the center of the room. A lone Sunchanter holding a torch patrols the west side of the room; a glowing frog also resides in this room. Hands-like-Fish is being held captive in the back of the room. This chamber's west and eastern walls are lined with pillars, and each of these two walls have a hallway extending out from them. Each hallway's entrance is thusly bordered by two of the four pillars on lining the respective wall. A chest can spawn south of the pillar on the south side of the entrance to the hallway leading west of the chamber.