The UESPWiki – Your source for The Elder Scrolls since 1995
< Elder Scrolls Online: Quests: Blackwood / Side Quests
Jump to: navigation, search

An Argonian named Jela asked for my help to rescue her friends from the Sul-Xan, a dangerous tribe that seeks to use them to summon a spirit of destruction using something called the Idol of Xulunaht.

As you approach Xi-Tsei, you'll notice an Argonian named Jela standing out front. Speak to her to begin the quest.

"I erect the spine of fear, formidable stranger. I need your help.
The Sul-Xan captured me and my friends in order to use us for a cruel ritual. I managed to escape, but my friends remain inside. I intend to go back and rescue them."
Do you know anything about the ritual that's endangering your friends?
"I overheard as I attempted to escape … the Sul-Xan possess a relic, the Idol of Xulunaht. They will use it to consume the spirits of my friends so that they may summon a spirit of destruction.
I am no limp-finned hatchling, but I cannot stop this alone."
What do you need me to do?
"I need you to come with me into this xanmeer and free my friends in order to interrupt the Sul-Xan's rituals. Then, we must destroy the Idol of Xulunaht to prevent this atrocity from befalling another clan.
I will pay you handsomely for your aid."

The Sul-Xan have kidnapped her friends to fuel a ritual. To this end, they're using a relic called the Idol of Xulunaht to siphon souls from the bodies of hapless travelers. Jela wants you to accompany her into the xanmeer to free her friends and destroy the idol, so the Sul-Xan can't do this to anyone else.

You will find the first victim, Kuran, on the south side of the swampy first portion of the delve. He is at the top of the hill along the main path, and recognizes Jela when you draw near. Destroy the ritual focus to set him free. The other two victims are inside the xanmeer proper. You can enter the ruin from a door on the northern side of the delve (follow the river all the way west, then proceed east), or by crossing the bridge just across from where Kuran was being sacrificed.

Crossing the bridge will immediately take you to the next victim, so it's recommended you rescue Kuran and cross the bridge to enter the xanmeer.

Enter the pyramid. For detailed information on what you can expect to find in the xanmeer whether you're on the quest or not, take a look at the article for Xi-Tsei. Jela's friends are each being held in the southwestern and northeastern chambers.

Once you've rescued all of her friends, Jela will lead you to the nearest exit hallway, requesting that you speak with her. If you rescued Last-to-Eat last, Jela leads you to the hallway heading east out of the southernmost chamber. If you rescued Hands-like-Fish last, Jela will speak with you in either of the hallways leading north out of the northernmost chamber.

"My egg-brothers and sisters are safe, thanks to you. There is one task left before us, if I have not yet reached the limits of your assistance.
We need to destroy the Idol of Xulunaht to ensure the Sul-Xan do not summon the spirit of destruction."
How do we do that?
"We must find where the Sul-Xan are keeping it first. It will likely be somewhere of great importance to them, and heavily guarded.
I just pray we are not too late. There has been so much death here already."
How does the Idol of Xulunaht work?
"From what we have seen thus far, it seems as though these terrible rituals tear the souls from the victim. I believe the Sul-Xan found a way to transfer the stolen spirits into the idol in order to power it. It is dark magic, certainly."
Will destroying the idol prevent the Sul-Xan from doing this again?
"That, I cannot know. I hope so. If it doesn't stop them completely, it will at least slow their schemes. Destroying the Idol of Xulunaht should at least protect others from being trapped here. That is enough for me.
Let's go." 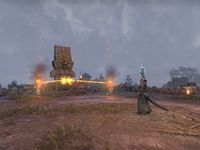 Destroy the Idol of Xulunaht

Now that Jela's friend are safe, it's time to find the Idol of Xulunaht. If Last-to-Eat was the third person you rescued, you won't have to travel far to find the idol: the hallway leading to the idol is right behind her altar, on the north side of the northernmost chamber.

Head out of the northern hallways to the xanmeer's pinnacle. Here, you'll find Raj-Kaal Ioraxeek performing a ritual on a Sul-Xan Raider. Two Argonian civilians already lay dead on either side of the altar behind the raider, who is suspended by the war-chief's spell in front of the idol. Whether not you kill the raj-kaal matters not; all that matters is that you destroy the idol. You will likely have to fight him to reach the idol, though.

Once you've smashed the relic, exit the dungeon. You should head down the stairs leading southeast from the raj-kaal's platform and grab the skyshard, then jump down the ledge and into the water by the entrance. Head through the door and travel a short ways east from the delve to find Jela, whom you must speak with to end the quest.

"Spawn-worthy feelings to you, brave warrior. Not only did you rescue my tribe, but you became a storm that tore free the evil roots of the Sul-Xan here.
With this, you have saved many more innocents."
Will you and your friends be safe now?
"Yes, thanks to you. The Sul-Xan in this place will flounder without their idol and my friends are now safely out of their reach. You saved us, and likely many more, with your actions.
Take this, beek-ojel, with our thanks."

Jela rewards you for rescuing her friends, just as she said she would.