The UESPWiki – Your source for The Elder Scrolls since 1995
< Elder Scrolls Online: Quests: Northern Elsweyr / Story Quests
Jump to: navigation, search
Euraxia, the Usurper Queen of Rimmen, has ordered her forces to attack Riverhold. I need to help defend the town. 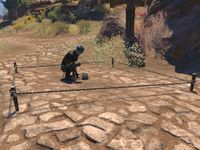 Cadwell with his homemade traps 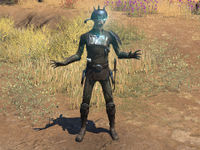 "Well, that's an evil-looking Orc. A necromancer, I do believe."

With the impending attack on Riverhold by Euraxian forces, talk to the war council—Khamira, Gharesh-ri and Tharn. They will have some ideas as to what to do. Your first task is to accompany the monk Zamarak and warn the people of Greenleaf Farm which is to the west of the town. When you arrive, it is already besieged by Euraxian troops, and the lady of the house won't leave without her husband and brother, so you have to go and find them. The husband is still safe, unfortunately the brother has been killed. Zamarak stays behind to give him the last rites, while you follow the husband back to the farm and talk to Khamira, who sends you off to assist Captain Nala-do.

Nala-do's plan is to harass the Imperial supply camps by scaring off their horses and setting fire to their supplies. Do this in two camps—as well as killing everybody in them. Then Nala-do will send you to assist Cadwell. 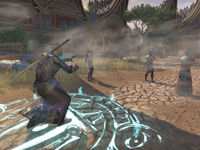 Cadwell is busy setting some exploding traps along the routes that the invading army will take. He manages to set one off by accident and is knocked down, but asks you to arm a couple more. When you return to Cadwell you will find him having another episode of visions. Speaking with him about them, you will learn that an Orc Necromancer is leading his forces to Riverhold. While he puzzles over why he keeps seeing what the Betrayer's Head sees, you can broach the idea that he and the Betrayer are the same person. While he initially dismisses the idea, Cadwell does have a faint memory of once being called that.

That aside, you need to go warn the defenses at Riverhold about the approaching invaders. As you leave, Cadwell's traps will do their work and dispatch some Euraxian Soldiers traveling down the road. 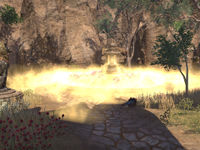 "The Moon Pillars are activated. Riverhold is sanctified."

Riverhold has to be told that it will be fighting off not just human troops, but necromantically animated undead, and that anyone who dies, friend or foe, is likely to be reanimated to add to the ranks of the invaders. As you go to warn Nala-do, you'll find that she has already found this out the hard way by killing off a number of invading troops only to see them be reanimated. Fight them off all around the square: you'll be interrupted by Zamarak who suggests performing a holy ritual to counteract the necromancer's raise-dead animation. 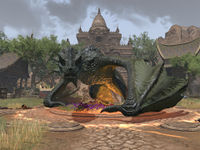 "A cowardly attack! Bahlokdaan will crush you!"

Head to the Temple of the Purifying Moons with Zamarak while he first learns the words of the blessing, and then speaks it at three different sites. You'll have to keep undead off him as he does so. When he finishes the ritual, all the invading undead will collapse, the battle will seem to be won... until three dragons appear in the sky. Khamira roars out defiance, and reveals herself as the surviving daughter of the late King and Queen, who were killed by Euraxia during the Frostfall Coup and the rightful Queen of Rimmen. The dragons' leader—Kaalgrontiid by name—tells one of his followers, Bahlokdaan, to finish off the resistance, before flying off with the second dragon (Mulaamnir, who you encountered earlier). 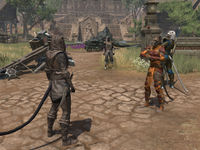 "Well fought! We have shown that the Khajiit will not run. Not even from a Dragon!"

However, Bahlokdaan is the weakest of the three dragons, and there just happens to be a ready-loaded ballista nearby: which you are told to fire, and when you hit Bahlokdaan, it will injure and ground him. Finish him off on the ground: just be careful not to stand for too long within his aura of incineration on the ground, but you can reach to hit him in melee even without doing this (and step out of it occasionally, just in case.)

Returning to the war council after your victory: Tharn had no more idea than anyone else about Khamira's true heritage, but is happy to support it, and advises taking the attack to "Queen" Euraxia as soon as possible, before she can recover from this defeat. You'll get a decent greatsword as a reward, and some gold.

This Elder Scrolls Online-related article is a stub. You can help by expanding it.
Retrieved from "https://en.uesp.net/w/index.php?title=Online:The_Battle_for_Riverhold&oldid=2357133"
Categories:
Hidden categories: