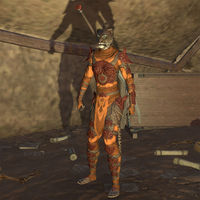 Captain Nala-do is a Khajiit commander of the Northern Elsweyr Defense Force. 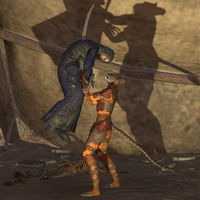 She is first met within the ruins of the Defense Force Outpost. As you approach her, you'll witness the Captain running through the Euraxian Necromancer responsible for summoning the undead as she says:

Captain Nala-do : "If you're so fascinated by the dead, why don't you join them?"

You can then report to her and hand her the sensitive documents you were asked to retrieve.

"This one doesn't know you, but at least you aren't a walking corpse.
This one must ask, why are you here?"
I'm <Character Name>. Khamira asked me to recover these documents and give them to you.
"Bright Moons! This one thought these were lost forever. You saved many lives at great risk to your own, walker.
You have Nala-do's respect. This one will guard these documents with her life."
Who did you just kill?
"That was one of Euraxia the Usurper Queen's pet necromancers. His undead devastated our troops, so this one took pleasure in ending his existence.
Now Nala-do must return to Riverhold and consult with Gharesh-ri. We must find a way to go on."
How long has Euraxia been employing necromancers?
"Euraxia's chief necromancer, Zumog Phoom, has been with her for some time, but our intelligence suggests his followers have only recently rallied to her side.
Find Abnur Tharn and Khamira. Tell them to meet us in Riverhold."
I'll find Abnur Tharn and pass along the message.

She'll then run off and disappear in a flash.

Once you have helped Khamira in the Sleepy Senche Mine, you can return to Riverhold where Captain Nala-do will be going over battle plans with Lord Garesh-ri and Abnur Tharn in the K'har Zhab Hall. When you talk to her, she will thank you for finding the documents previously.

"The losses we suffered at the Defense Force outpost were devastating, but we aren't done yet. The documents you recovered from the ruins of the camp provide options and access to allies, should we need to call upon them."

After you convince Tharn to attempt a parley with his half-sister and heard his initial plan, you can ask the Captain about Euraxia. She will dislike you having to play nice with the usurper but she will warn you to be careful.

"This one hates the idea of talking to the Usurper Queen. We should be stabbing her in the neck! Still, Nala-do sees the necessity, even if she doesn't like it.
Euraxia will almost certainly betray you, so be careful when you face her, yes?"
How did Euraxia become queen of Rimmen?
"By marching into Elsweyr with a mercenary army and slaughtering our rightful Khajiiti rulers. Not only did the Usurper slay our king and queen, she murdered the rest of the royal family.
Her crimes, they swarm around her like fleshflies on dung!"

Meet the Captain at the Euraxian camps:

"Ah, five-claw, just in time. Khamira told you what to do, yes?"
Scare the horses and set fire to the supply carts. Basically cause general mayhem.
"Mayhem. Such a beautiful word. Especially when applied to dung-covered Euraxians!
This one will keep the volunteers safe while you cause an uproar in the camp."
Why not simply deal with the soldiers and be done with it?
"You did hear what Nala-do said, yes? About the volunteers? Our militia consists of a few trained troops plus many well-intentioned civilians who do not know a sword from a scissor.
Guess which ones accompanied Nala-do on this mission."

Cause a disturbance and she'll instruct the volunteers to start looting:

She'll then turn to you:

"If those dung-heads had proper tails, what we did to their supply camps would put a kink in them!
One more small task, five-claw, if you are willing. This one would have you help the strange one named Cadwell."
What's Cadwell doing that requires my help?
"Cadwell was adamant about helping our cause. He's been tinkering with bits and scraps. Claims he's made traps to slow down the Euraxians.
If you would, help the strange one set his traps where the Euraxians are sure to spring them."
Where can I find Cadwell?
"Cadwell works along the main road that heads south out of Riverhold. Make sure he doesn't blow himself to bits, yes?
Now Nala-do must return to the city before the Euraxians arrive in force. This one wants to be there when the battle truly begins."
I'll go help Cadwell.

Find the Captain near the center of town where she is already taking down Euraxians, only to be interrupted by the necromancer:

As she runs back for reinforcements she'll yell:

Captain Nala-do : "This one must warn the others!"

After you and Zamarak sanctify Riverhold, it appears the town can be saved, until...

Defeat Bahlokdaan and the battle is won, but the war has just begun:

Captain Nala-do : "The Dragon is dead! All hail Queen Khamira!"

If you talk to Captain Nala-do after the dragon is killed:

"Can you believe it, five-claw? Our queen still lives! Now, more than ever, we truly have something to fight for."

Enter K'har Zhab Hall and speak to the Captain first, and she'll say:

"Our people have someone to fight for, and that makes Nala-do purr with contentment.
But there is still much to do before Anequina is free."

After receiving your reward for winning the battle, Nala-do will comment that she has pledged herself to Khamira:

"Nala-do has pledged her service to Queen Khamira. This one will do everything in her power to keep the royal heir safe and secure."

"A small strike force, like an arrow loosed at a specific target. Nala-do approves of this plan."

After receiving your orders, meet Captain Nala-do near the southern siege weapons:

"Five-claw, good, good! We have work to do.
Are you ready to disable the siege weapons and wreak some more havoc?"
I'm ready. What's the plan?
"The soldier guarding the gate to the south weapons platform appears bored. This one plans to give her something to get excited about. When she leaves her post, slip through the gate and set fire to the siege weapons.
Be quick, five-claw!"
There's only a single soldier guarding the south weapons platform?
"At the gate, yes. This one observed a few more soldiers on the platform, but not many. The Usurper Queen feels secure in Rimmen. We're about to change that.
After this one deals with the soldier, I will move on to the north platform. Meet me there."
All right, I'll go set fire to the siege weapons on the south platform.

She'll then approach the gate and call to the guard:

Captain Nala-do : "Gharesh-ri has been spotted in the market. Hurry!"
Euraxian Soldier : "Finally, some action!"

Both take off towards the market area. You can then go onto the platform and destroy the siege weapons and then meet with Nala-do to the north.

At the north platform, Nala-do will be waiting:

Captain Nala-do : "Nala-do will deal with the soldier. This one can't wait to get out of this dungy armor!"

Before the guard can call for help, Nala-do sneaks up behind him and slits his throat:

Captain Nala-do : "Go. Destroy the siege weapons. Nala-do will clean up this mess."

Burn the weapons and she'll call out to you:

Captain Nala-do : "We should be able to watch Queen Khamira destroy the far platform from over here.

After Khamira destroys the last weapons in the distance, she'll cheer:

Captain Nala-do : "She did it! Now let's meet the others at the sewer entrance."

Once the siege weapons have been destroyed, the group will meet outside the sewers. After there is discussion about splitting up, talk with Nala-do:

"A queen should not rush into danger! It is unseemly! This one should be at her side to keep her safe.
Nala-do will follow orders, though. We must make our way through the crypts and into the palace before Khamira gets into too much trouble, yes?"
Is it really a good idea to split up our party?
"Khamira is queen now, so this one must do as she says. There are dangers ahead regardless of whether we stick together or not. But we have a better chance of reaching the Usurper Queen if we approach from multiple directions."
Khamira can handle herself. And she will be with Abnur Tharn.
"Yes, and if anything happens to our new queen, this one will have Tharn's head on a platter!
We waste too much time, five-claw. Are you ready to enter the sewers and find the door to the crypts?"
Let's go find the crypt door.

Once inside the Sewer Recess, Nala-do and Zamarak will head towards the door to the crypts:

Captain Nala-do : "Everyone, unsheathe your claws."
Zamarak : "There is the door to the crypts. Let us see if the master key still works."
Captain Nala-do : "Nala-do will guard the rear. You go ahead and find a way into the palace."

After you have examined the disturbed royal crypts and their bodies, Nala-do will arrive:

Zamarak: "We need to find the way into the palace—and quickly!"
Captain Nala-do: "Euraxia not only murdered our king and queen, she desecrated their graves? She's a monster!"

Once inside the Palace itself, you will need to find your way to the chapel and from there, the Royal Bedroom. Nala-do will point it out when you get close.

Captain Nala-do: "The Chapel of the Guiding Moons is just ahead!"

The chapel, however, is a trap and Zumog Phoom and Cadwell the Betrayer will be there to spring it:

During the battle, Nala-do will remark:

As you chase after the necromancer, Nala-do suggests splitting up:

Captain Nala-do : "Go left while this one goes right! We will meet in the Royal Chambers!" 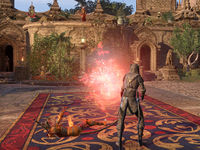 Nala-do will be with Khamira when she confronts Euraxia in the palace courtyard. Euraxia will then cast a spell at Khamira. In a desperate, and last, act for her queen, Nala-do leaps in front of Khamira and takes the spell full on.

As you get nearer Zumog Phoom in his laboratory, Nala-do will appear in front of you:

Speak to her and she'll say:

"Nala-do should not be here. This one should be prowling the Sand Behind the Stars and preparing for the Next Pounce, not lingering in this fetid tomb."
Why are you here, Nala-do?
"Zumog Phoom called Nala-do back. He planned to use her in a foul ritual, but dead or no, Nala-do is still a soldier. His follower never stood a chance.
This one sensed … something. Decided to wait here a little longer."
The ritual was using Cadwell's energy. What happened to it?
"Nala-do thought the cloud of energy reminded her of the strange knight adorned in cookware. This one thinks she absorbed the energy when she killed the necromancer and disrupted this part of the ritual."
Can you return the energy to Cadwell, Nala-do?
"Return it? Perhaps, though that will certainly shred this spirit-form. No matter. Nala-do no longer belongs in this realm. Tell Queen Khamira and Gharesh-ri that Nala-do says farewell.
Now, prepare yourself, strange knight. This belongs to you."
Rest easy, Nala-do.

This Online-related article is a stub. You can help by expanding it.
Retrieved from "https://en.uesp.net/w/index.php?title=Online:Captain_Nala-do&oldid=2035212"
Categories:
Hidden categories: