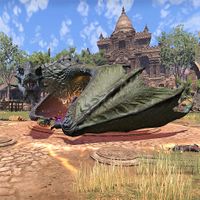 Bahlokdaan is a feldgrau-green dragon who serves as an underling of Kaalgrontiid. When first encountered, he has attacked Star Haven Adeptorium. You are tasked with grounding him with the dragonhorn and distracting him, though he flies off afterwards.

You'll face off with him for a final fight during the Battle for Riverhold.

Bahlokdaan is first encountered after you have finished sparring with Grand Adept Ma'jha-dro‎‎. He flies up and burns the adeptorium as the Euraxians invade the premises. When you reach Dragonhorn Tower and sound the horn, Bahlokdaan will shriek and crash-land inside the Adeptorium, where he will be fought.

Once you have dealt with the undead, a rage of dragons will arrive in the skies above Riverhold. Bahlokdaan will be among them, along with Mulaamnir and Kaalgrontiid. After Khamira confronts Kaalgrontiid, he will have Bahlokdaan stay behind to deal with the defenders. The green dragon will land on the roof of Tajirri's House, conveniently in range of a nearby ballista.

After he is hit by a bolt, he will land in the center of the market:

Once he is slain, his body will remain within the town for some time afterwards. It will be guarded by Defense Force Warriors, with some hold rakes meant to soon dispose of the giant beast.

This Online-related article is a stub. You can help by expanding it.
Retrieved from "https://en.uesp.net/w/index.php?title=Online:Bahlokdaan&oldid=2035088"
Categories:
Hidden categories: