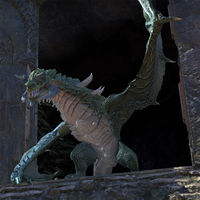 Kaalgrontiid escaping from the Halls of Colossus

Kaalgrontiid is a colossal green dragon who was imprisoned by Khunzar-ri in the Halls of Colossus long ago. Locked behind a magically sealed door at the Summit of Rending Flames, Captain Calsivius attempts to break the seal to control him for Euraxia Tharn, and after he is killed, Abnur Tharn combines the Wrathstone to undo the spell. However, the door is opened, and Kaalgrontiid emerges from the depths before flying off into Northern Elsweyr.

Kaalgrontiid then leads his fellow dragons on a destructive tear across Elsweyr, seemingly in search for something. He is allied by the Euraxians through his second-in-command, Mulaamnir, and trusted soldier, Bahlokdaan. It's up to you and the defenders of Elsweyr to find out what he is searching for, and stop him. 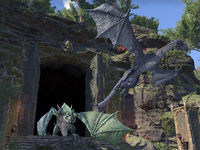 Kaalgrontiid relishes in his freedom

After Captain Calsivius' death, the ground rumbles and shakes: 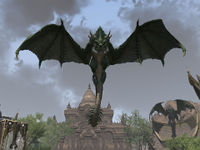 Kaalgrontiid arrives to finish the siege

When the dragons begin to fly over, Kaalgrontiid will hover above the town square:

Kaalgrontiid: "Such pathetic creatures. Flee before Kaalgrontiid, you insignificant morsels!"
Khamira : "No. Riverhold belongs to the Khajiit."
Lord Gharesh-ri : "Khamira, consider your next words very carefully …."
Khamira : "Now I will speak the words my people need to hear!"
Khamira : "We are Khajiit! We are the children of Alkosh, the daughters and sons of Jone and Jode! We do not run, even from Dragons!"
Kaalgrontiid : "Bahlokdaan! Prove your worth. Destroy these paltry insects!"
Khamira : "Stand with me, people of Anequina! For I am Khamira, daughter of King Hemakar! I am your queen!"

Kaalgrontiid will then fly off and leave Bahlokdaan to fight. 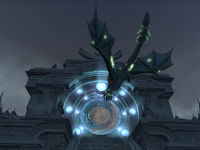 As you enter the plane, the dragons will circle until they notice you and your companions:

Kaalgrontiid : "Mulaamnir. The vermin still pester us. Devour them."
Mulaamnir : "As you say, my brother." 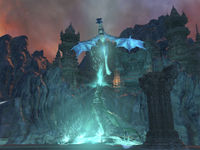 Kaalgrontiid empowers his brother with the energy of the Core

After you make your way to the Core, you will find Kaalgrontiid already absorbing the power while Mulaamnir stands guard. Once you begin to fight:

Muulamnir: "You amuse me, little insect."
Kaalgrontiid: "Do not let them best you, Mulaamnir!"
Muulamnir: "Yes, brother, I will make this quick!"

As Muulamnir is slowly beaten back, Kaalgrontiid will be annoyed:

Kaalgrontiid: "End this, my brother, or I will end you." 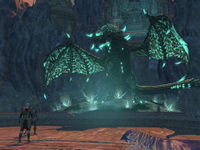 Once Mulaamnir is defeated, Khamira will work to finish the ritual, much to Kaalgrontiid's dismay:

Kaalgrontiid is thrown far into the sky and expelled from the plane.

You will hear his voice from outside as you approach the New Moon Fortress' amphitheater.

Kaalgrontiid: "Through the portal, fleas. There is work to do on my island."
Abnur Tharn: "Kaalgrontiid? Here? We must find him!"

Tharn confronts him in the amphitheater.

Abnur Tharn: "Kaalgrontiid!"
Kalgrontiid: "You shall be the first to behold the rise of the Dark Aeon!"

He flies off before you can have any sort of substantial interaction with him.

You will see him again on Dragonhold, near the island's aegis.

As Joorahmaar nears defeat, he calls out:

Kaalgrontiid: "The island shall rise and a new moon will be born!"

After Joorahmaar's defeat, the island begins to rise.

Abnur Tharn: "I destroyed the aegis, but now we need to get out of here!"
Kaalgrontiid: "I am the Dark Aeon!" 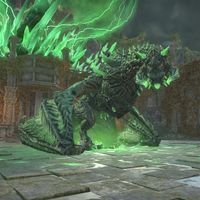 Kaalgrontiid, empowered in his lair

After the first aeonstone formation has been destroyed:

Kaalgrontiid: "Who dares attempt to stop my ascension?"

After the second aeonstone formation has been destroyed:

Kaalgrontiid: "You think to stop the rise of the New Moon? Never!"

After the final aeonstone formation has been destroyed:

Kaalgrontiid: "The flow of power has ceased! I will destroy whoever dares interfere with my ascension!"

Approach him at the pinnacle.

Abnur Tharn: "I'll cast spheres of protection upon the grapple points when Kaalgrontiid prepares to shout!"
Kaalgrontiid: "Come, mortals. Let me taste your blood. One last drink before I complete my ascension."

As he takes flight during battle:

Kaalgrontiid: "Infuriating fleas! How dare you attempt to stop the rise of the Dark Aeon!"
As he takes flight:
Kaalgrontiid: "Tiresome mortals, submit to my reign and you may yet serve me!"
Kaalgrontiid: "You cannot turn the tide of prophecy, mortals!"

As he descends to fight you face-to-face:

As he nears defeat:

Kaalgrontiid disintegrates when he dies.

In the Dragon Rage trailer, Kaalgrontiid says the following:

"We are free my brothers. Free to ravage this realm, to finish what we started... so long ago."
"We shall take from this land, what is rightfully ours."
"No mortal can oppose us."
"And let all those who dare... die."
"Now is the hour of our fury, and the beginning of our reign."
"Nothing can defeat... a Rage of Dragons!"

Unrelenting Force
In the Halls of Colossus, Kaalgrontiid shouts at you, Tharn, and Khamira after being released, knocking the three of you back

Moon Blast
While on Jode's Core, Kaalgrontiid empowers Mulaamnir by charging him up with lunar energy.

Dark Aeon Growth
Similar to a normal Dragon's earth spike, but green.
Dark Aeon Breath
Green fire breath.
Wing Thrash
Kaalgrontiid hits you with his wing if you approach his side.