I awoke in Star Haven Adeptorium, home to an order of peaceful Khajiit adepts. It seems that I was asleep for many days, recovering from a devastating Dragon attack.

If the most recent chapter of ESO you own is Elsweyr, this will be the first quest of the game and where your new characters start. Otherwise, you will not be able to begin this quest. 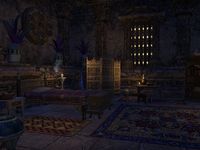 You awaken in a new place...

You awaken in a room within the Star Haven Adeptorium. A voice from outside instructs you to pick up the key on the nearby table, as well as the note found on your person. Apparently, you have just survived a Dragon attack, and have been healed by the monks here at Star Haven. Read the letter and grab the key off the table. When you exit the room, Grand Adept Ma'jha-dro calls to you, but you may talk to Zamarak first.

Regardless of whether or not you talk to Zamarak, you'll need to talk to Ma'jha-dro.

"Greetings. This one is Ma'hja-dro, Grand Adept of Star Haven.
He is glad to see you in good health, traveler. It is not every day that one survives a Dragon attack. Bright Moons must have blessed your path."
There was a letter from Abnur Tharn. Do you know anything about it?
"You were carrying that letter when we found you. It looked important, so we left it where you could find it.
But how do you feel, traveler? Did the Dragon cause any permanent damage?"
No, I don't think so.
"Let us test your strength then, yes?
Though this one is now Grand Adept, he once trained the warriors of Star Haven. Sadly, it has been many years since Ma'jha-dro last sparred with a pupil."
You want to spar with me?
"Not here, of course. This is no tavern brawl.
Collect a training sword and meet this one outside in the garden. Let us prove ourselves where Jone and Jode can see us."

You will find the training sword in a room to your right. Pick it up and proceed to the Star Haven Gardens.

Out here, there are Star Haven Adepts of many furstocks, meditating. The Grand Adept is in the middle of the gardens. Speak with him.

"This one fears the Dragon that attacked you was only the beginning, traveler. Dark Moons loom on Elsweyr's horizon, of that Ma'jha-dro has little doubt.
But enough talk. We came here to spar, did we not?"
Is sparring really the best way to determine if I'm fully recovered?
"Ma'jha-dro can think of no better! Like the two divine Moons that dance in harmony, let the balance of your blade reflect the balance of your soul.
Are you prepared to start?"
I'm ready to spar.

Upon approaching the Grand Adept, you will be gifted with a status effect called Sparring Stamina for five minutes. The Grand Adept draws his sword. Do the same. Hit the Grand Adept with five light attacks. You will then need to block and retaliate with a heavy attack five times. The Grand Adept will then test your ability to break free. He will throw five traps at you, which you will need to break free from. After that, you will need to bash Ma'jha-dro five times and retaliate with a heavy attack. And with that, your training is done. Ma'jha-dro expresses that he is satisfied with your skill, but your conversation is interrupted by a strange sound in the distance.

Suddenly, a dragon swoops in from the north! The Grand Adept ducks, avoiding its fiery breath. He tells you to head north to the catacombs, and see if you can help the adepts there.

The Star Haven catacombs are just to the west of where you sparred. Upon entering the catacombs, you hear a voice.

Captain Carvain: "Spread out! Search the area and kill anyone who gets in our way."

Here is where the sneaking tutorial begins. Crouch and approach the skeleton that is banging against the nearby door, clearly left behind. Sneak up behind the skeleton and perform a sneak attack while crouched to kill it. Then enter the Halls of Eternal Rest. There is a weapon rack located at the entrance of the halls for you to take your pick from. There are also several enemies in these halls, including skeletons and Euraxian Necromancers for you to use those weapons on. If you take the path to the right in the Halls of Eternal Rest, you will have the option of picking the lock to the Relic Vault, which is guarded by a necromancer and a trivial lock. There is plenty of gear to pick up within the relic vault and around the halls.

Continue forth towards the Tomb of the Grand Adepts. You will find Captain Carvain, the voice from earlier, harassing a trio of Star Haven's adepts. When you approach, Captain Carvain will attack.

Defeat Captain Carvain and speak with Adept Izjadi. She thanks you, and tells you that the soldiers are searching for something. Izjadi also tells you about the Dragonhorn Tower, which holds the relic it's named after. The Dragonhorn in the tower is said to be capable of grounding dragons when blown, though Izjadi isn't sure how true the tales are. You are tasked with finding the Dragonhorn and seeing if it can truly be used to defeat the Dragon. 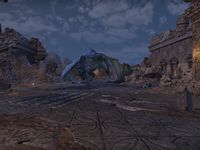 You can exit the catacombs through the door behind Adept Izjadi, and head into Star Haven Grounds. Take the northern path to reach the tower. There are many Euraxian soldiers on the premises, and the Dragon is circling overhead. Make your way towards the Dragonhorn Tower. Climb the ladder up the tower to reach the horn. The horn is elaborately decorated, but fragile. Blow the horn as Izjadi instructed, and an unlucky Bahlokdaan will swoop around directly in front of it, effectively grounding himself. The horn breaks after you blow it. Climb back down the ladder and head towards the adeptorium, where you'll find Zamarak and the Grand Adept.

Follow them through the door into the Star Haven Adeptorium. Who should be beyond it but the very Dragon you forced to land, snacking on some dead adepts. Engage the Dragon. He will show you some of the hallmark abilities Dragons possess, including fire breath and snapping jaws. The Grand Adept will heal you with his restoration staff, and Zamarak will attack from a distance using his bow. You won't be fighting for long, though. During the fight, a booming voice calls for the Dragon, and it flies away. This is your chance to escape.

Continue forward past where the Dragon stood, and escape into Star Haven Courtyard. Zamarak and Grand Adept Ma'jha-dro will converse as they flee. When you arrive in the courtyard, you'll be met by the adepts you encountered along the way. Ma'jha-dro rewards you and sends you off, encouraging you to talk to Zamarak, as he's also leaving. Whether or not you choose to follow up with Zamarak or go somewhere else, after finishing this quest, Tamriel is open to you.

This Elder Scrolls Online-related article is a stub. You can help by expanding it.
Retrieved from "https://en.uesp.net/w/index.php?title=Online:Bright_Moons,_Warm_Sands&oldid=2421793"
Categories:
Hidden categories: