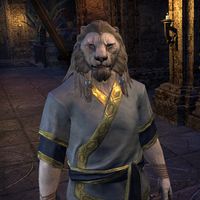 Grand Adept Ma'jha-dro is a Cathay-raht Khajiit located within the Star Haven Adeptorium. He used to train the adepts of the adeptorium before becoming the Grand Adept.

Grand Adept Ma'jha-dro will first speak to you when you exit your room in the training halls.

You have the option of speaking with Zamarak first, but nevertheless, you speak with the grand adept to continue the tutorial quest.

"Greetings. This one is Ma'hja-dro, Grand Adept of Star Haven.
He is glad to see you in good health, traveler. It is not every day that one survives a Dragon attack. Bright Moons must have blessed your path."
There was a letter from Abnur Tharn. Do you know anything about it?
"You were carrying that letter when we found you. It looked important, so we left it where you could find it.
But how do you feel, traveler? Did the Dragon cause any permanent damage?"
No, I don't think so.
"Let us test your strength then, yes?
Though this one is now Grand Adept, he once trained the warriors of Star Haven. Sadly, it has been many years since Ma'jha-dro last sparred with a pupil."
You want to spar with me?
"Not here, of course. This is no tavern brawl.
Collect a training sword and meet this one outside in the garden. Let us prove ourselves where Jone and Jode can see us."

Grand Adept Ma'jha-dro: "Take up one of our training swords and meet this one in the gardens."

The Grand Adept is waiting for you in the Star Haven Adeptorium Gardens. Meet him there. When you approach him, he will speak.

Grand Adept Ma'jha-dro: "The skies warn of a changing season. Can you see it?"

"This one fears the Dragon that attacked you was only the beginning, traveler. Dark Moons loom on Elsweyr's horizon, of that Ma'jha-dro has little doubt.
But enough talk. We came here to spar, did we not?"
Is sparring really the best way to determine if I'm fully recovered?
"Ma'jha-dro can think of no better! Like the two divine Moons that dance in harmony, let the balance of your blade reflect the balance of your soul.
Are you prepared to start?"
I'm ready to spar.

From here, the combat tutorial begins.

What a powerful blow! Once more!

Your training is interrupted by a strange sound in the distance.

You will next encounter the Grand Adept after blowing the Dragonhorn.

The Grand Adept will speak next after the fight against Bahlokdaan.

When you arrive in the courtyard, the Grand Adept will beckon you forth.

"Thank you for saving Ma'jha-dro's disciples. You have a courageous spirit. It will do you well, should you decide to stay in Elsweyr. And this one does hope you decide to stay.
The Khajiit need heroes like you during these dark times."
Elsweyr certainly seems to have its share of troubles.
"And only more to come, this one fears.
Before you leave, you should speak to Zamarak. It seems that he's also decided to leave us. Perhaps he can help guide you to your next location."

Adept Izjadi: "Grand Adept Ma'jha-dro? What will we do now?"
Adept Birun: "Star Haven is no longer safe. Who knows when it will be attacked again?"
Grand Adept Ma'jha-dro: "To give into despair, this is easy. Let us instead find strength in hope. Jone and Jode will one day shine on Star Haven again. This, we must continue to believe."

Speaking with him after the quest:

"Ma'jha-dro must see to his disciples. There is much work to be done in order for Star Haven to recover, and they will need encouragement to face the trials that lie ahead.
May Bright Moons guide your path, traveler."

If you helped out the Star Haven Adeptorium when you first started, Grand Adept Ma'jha-dro will be attending the coronation ceremony in the Rimmen Palace.

"You have done much since we last met, traveler!
This one knew you had a brave heart, but never did he imagine you would become the savior of Elsweyr. Thank the Moons we happened upon the wreckage of your caravan."
How has the adeptorium been since the Dragon attack?
"We are still repairing Star Haven, one stone at a time.
Unfortunately, the brunt of the Dragon's attack targeted the adept's dormitories. Everyone sleeps under the moonlight until the work is completed."
missing dialogue?