The UESPWiki – Your source for The Elder Scrolls since 1995
< Skyrim: People / Merchants(Redirected from Dragonborn:Glover Mallory)
Jump to: navigation, search 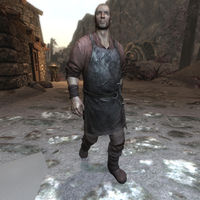 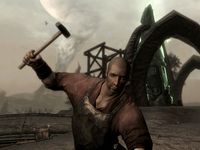 Glover Mallory, a Breton thief, is a blacksmith in Raven Rock. He is the brother of the prominent Thieves Guild member, Delvin Mallory, and a member of the guild himself. In fact, he's the only member on Solstheim. He is not exactly active as a Guild member, preferring to earn an honest living as a blacksmith specializing in making and repairing Bonemold armor for the town guards: everything that has ever linked him to the Thieves Guild and his past is kept behind a key-locked door in his basement.

He wears a blacksmith's apron and some shoes. He wields an ebony dagger, and carries a key to his house and some upper-class items and gold.

He starts his day at 6am with a two-hour breakfast in his house. Then, at 8am, he walks out to his forge and works for twelve hours. At 8pm he heads to the Retching Netch to relax until midnight, then walks to the Earth Stone to work on it for six hours or, if the stone has been cleansed, he'll head back to his house and go to bed.

When you approach him, he may talk about himself as a smith, saying things like, "Glover Mallory's the name. If you're looking for a smith, you've found one of the best." or "Either you're here to get showered in sparks, or you're looking for something to buy. Out with it." or "Steel, dwarven, ebony... if it's broken, I can mend it." When Raven Rock is still in its sad state of disrepair, he'll say, "A lot of folks around here look to strangers for help. I hope you won't disappoint them." When the mines are reopened, he'll say, "You've got a good thing going here now that you've reopened the mines. Don't let it go to waste." When he's free from Miraak's grasp, he'll say, "Stealing a man's mind... it just isn't right. Thanks for saving me from that madman." or "I've heard of stealing things from people, but never thought you could steal someone's mind."

If you ask him how he ended up in Raven Rock, he'll say, "A fine question, and the one that I hear most often from visitors to our town. I wish I had a more romantic tale to tell, but I was simply seeking my fortune and chose Raven Rock to ply my trade. Besides, knowing how to repair bonemold armor wasn't very useful in Riften." You can now ask him who taught him how to repair bonemold, to which he'll reply with, "I had a friend over there, a dark elf named Vanryth... a very talented armorsmith. Spent a lot of time with the guy swapping smithing techniques. Learned a heck of a lot, including how to repair bonemold. After he moved on to greener pastures, I decided to pack up, move out here and put those lessons to the test. Been here ever since." During the quest Dragonborn, if you ask him if he knows someone named Miraak, he'll sound dazed and reply, "No, I... Wait. Maybe. I don't know how I know that name..." When you ask him what he means by that, he'll say, "I... I'm not sure. I don't want to talk about this." When you ask him about the shrine at the Earth Stone, he'll be perplexed, saying, "It's a shrine, for... Err, I don't remember. I thought I remembered, but now I'm not sure. Is it important, or did I imagine that?" When asked if he wants a drink from Geldis Sadri, he'll gladly accept, saying, "Perfect! I was just thinking about heading over for a drink. Thanks for saving me the trip." Once the mines are reopened, if you ask him how things are different, he'll say, "I've always had a steady stream of work thanks to the Redoran Guard, so it hasn't affected me much. However, I've seen the smile on people's faces and there's hope around here once again... something we've been lacking for a long time." If you ask him if he wants to be Neloth's steward, he'll find the idea hysterical, saying, "Ha ha ha! Gods, that's rich. Work for Neloth. Ha ha ha!" However, if you're in the Thieves Guild, you can ask him if he knows someone for the job, in which case he'll say, "As one Thieves Guild member to another? Try Drovas over in the Retching Netch. Not too long ago he tried to pawn some stuff off. Seemed kinda desperate for coin." When exiting conversation, he'll say, "Bring your weapons and armor to me. I'll fix it up right."

If you ask if something's wrong, he'll angrily complain, "You haven't seen Crescius Caerellius have you? That foolish old man's taken my pickaxe again!" When you ask him why he cares so much about a pickaxe, he'll say, "No, no, no. This isn't just your run-of-the-mill pickaxe... I'm talking about an Ancient Nordic Pickaxe. They don't exactly grow on trees, you know." If you ask him why he can't have the guards deal with it, he'll say, "Um, I prefer to handle these things on my own. Look, if you see Crescius, tell him to give me that pickaxe back and I'll pay you for the trouble." You can now ask him what an ancient Nordic pickaxe is, in which case he'll say, "It's the only tool tough enough to crack stalhrim, is what it is. Not many of those beauties left in the world... forging them is a lost art. The one Crescius 'borrowed' came from the Skaal Village up north. I, uh, traded them some goods for it." You can also ask him if stalhrim is a type of ore, in which he'll say, "Calling stalhrim an ore is like calling my forge a campfire. Some folks say it's 'enchanted ice,' but I think there's more to it than that." When you say that you're guessing it's rare, he'll confirm, saying, "I don't think I've come across more than a chunk or two in my lifetime, and smithing's my trade. If you're looking to learn more, you should head over to the Skaal Village. Someone there's bound to know more about it than I do." During the quest, he'll greet you with, "Find my pickaxe yet?" and when exiting conversation, he'll say, "You tell Crescius he better give that pickaxe back to me, or else." If you bring him back the pickaxe, he'll say, "So you finally tracked down old Crescius, eh? Quite a character, isn't he. Tell you what. Since you went through all the trouble of finding it for me and all, you keep it." When you question the reasoning of his decision, he'll say, "I just wanted to remind that codger you can't just go around taking things from other people. Now that you've delivered the message, I'm satisfied. Besides, that pickaxe hasn't done me any good in years. Maybe you can put it to good use." If you let Crescius keep the pickaxe, and lie to Glover that he lost it, he'll say, "Blast! That careless old fool. Well, thanks for trying anyway. Here you go... for your trouble."

When you complete Meet the Family, you can mention the shadowmark by his door, saying, "Well, well. It's been a long time since someone from the Guild's bothered to make their way out here. So tell me... how's my brother Delvin? Still spending his nights at the Ragged Flagon trying to win Vex's heart?" When you tell him he's doing fine, he'll say, "Good to hear. Damn layabout never even bothers to send his own flesh and blood a letter saying how he's doing. Can you imagine? Anyway, I suppose you're looking for work. Well, I've got bad news. This place is dryer than a damn bone." When you ask him if he's sure there's nothing, he'll say, "Eager to make some coin, eh? That's the spirit. I'll tell you what. The Guild's got a problem out here that I've been trying to deal with for years, but haven't been able to handle." When you ask him if the Guild really has a problem out in Solstheim, he'll say, "Don't look at me like that. I'm all alone out here, with no one to watch my back. And besides, it's really my problem anyway. I caused it." When you ask him what the problem is, he'll say, "A fellow Breton who went by the name Esmond Tyne showed up on my doorstep about a fortnight ago. He noticed the shadowmarks like you did, and I thought he was one of us." When you ask if he stole something, he'll confirm with, "That he did. Right out from under my nose. Can you believe it? It's my own formula for improved bonemold. Took me years to perfect." When you ask where he is, he'll say, "Well, before he ran off, he was talking some nonsense about trying to fence goods to the rieklings at Castle Karstaag. I told him he was crazy to even think about talking to those vicious little buggers, but he wouldn't listen. I'd bet a fat purse of coin that he's either dead or hiding out up there." When you tell him you'll get the formula, he'll say, "You do that, and I'll make sure you're set up right. You won't be disappointed." When you return, he'll say, "Any luck tracking down Esmond?" When you tell him Esmond's dead but you have the formula, he'll say, "I told him not to head up there. Sounds like the bloody fool got what he deserved. Here, I want you to take this key. Head inside my house and unlock the door in the basement. Help yourself to whatever you like inside. I won't be using it anymore."

Glover can often be seen talking with other Raven Rock citizens:

Adril: "Captain Veleth's mentioned how valuable you've become to the Redoran Guard. The Councilor and I appreciate your assistance."
Glover: "I'm glad to lend a hand."
Adril: "You must be using quite a bit of your raw materials repairing their weapons and armor. I'm sorry we can't compensate you."
Glover: "Not to worry, Adril. I'll recover my losses in due time."

Veleth: "I don't know what your playing at, Glover... but something about you just doesn't add up."
Glover: "Understandable considering the differences between us."
Veleth: "I'm not talking about that. I have a knack for smelling trouble, and for some reason you reek of it."
Glover: "I promise you, I have nothing but good intentions towards everyone in this town."

Glover: "Fethis! How's that pretty young daughter of yours doing?"
Fethis: "What in the name of the Black Hands is that supposed to mean?!"
Glover: "Nothing... I... I was just making conversation."
Fethis: "Next time you feel like having a conversation, talk to someone else."

Garyn: "So where do you hail from, Glover?"
Glover: "Skyrim. Born and raised."
Garyn: "Have any kinfolk?"
Glover: "Just a brother. Lives in Riften."
Garyn: "That's quite a distance from here. What's his trade? He a blacksmith as well?"
Glover: "Nah. He... finds things people are looking for. Makes a good bit of coin doing it, too."

Glover: "So what do you think, Vendil? You think this town will survive?"
Vendil: "I don't know. There are many who would've already expected us to leave this place."
Glover: "Sure, but then where would you go?"
Vendil: "A fair question, my friend... a fair question."

Geldis: "How's business, Glover?"
Glover: "The usual. Piles of armor to repair for the Redoran Guard."
Geldis: "Aren't you pleased to keeping busy?"
Glover: "These hands were made for bending steel... not mending bonemold. But, it's certainly better than not working at all."