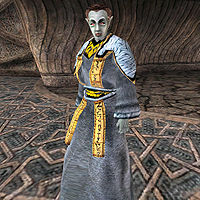 Mehra Helas is a Dunmer healer who can be found in the Temple Courtyard, which isn't surprising considering she's an Adept in the Tribunal Temple. If you speak to her about latest rumors after cleaning The Shrine of the Dead, you'll be able to discuss the strange smell you found in that tomb, which will help you combat the Crimson Plague. She sells books, ingredients, potions, spells, and spellmaking services to all who need them.

She wears an expensive robe and common shoes. Aside from her natural resistance to fire and the sanctuary provided by her ancestors, she knows a selection of spells from the schools of Restoration and more. Specifically, these are the same spells that she has available to sell.

"Give to the Temple, and receive the blessings of Almalexia."
"If you have heard the latest rumors, perhaps someone of your abilities and experience could find it in your heart to help the community."

"Our wealth dies with us, my child, but our good deeds outlive us all. Would you care to make a donation to the Temple, and receive the blessings of the Lady of Mercy?

"Thank you, my child."
"You don't even have five gold coins to your name? You poor little thing. Then bless you, my child, and may your fortunes improve."

Sorry, mehra. Not today.: "Bless you anyway, child."
What's Almalexia going to do with the money?: "Almalexia watches over all Her children -- the sick, the needy, the poor. Well... not actually in person. She used to... in person, you know. But She's made no public appearance for years, so the Temple takes care of Her children for Her. That's what the money goes for, child."

"They're Almalexia's personal guards, body and soul, scimitar and armor fortified by divine enchantments, pledged to honor and protect and serve Almalexia in all ways. They used to spend much of their time punishing criminals and protecting the people. Now they spend all their time protecting Almalexia. I suppose that's right. But it makes me uneasy. Sends the wrong signal. Vengeful might, rather than vigilant mercy."

"Almalexia's the Mother of us all, healer and protector. Always has been. I suppose She doesn't seem that way now. It's the war with Dagoth Ur. It's hard for all of us. She's had to change -- to toughen Herself and Her followers. It's true that sometimes dissenters disappear when they question Her doctrines. The Hands of Almalexia are more like inquisitors than knights of loving mercy. And Mournhold doesn't feel much like the City of Love any more. But hard times demand hard gods."

"I've heard there's a new, strange disease going around. Nerile Andaren -- one of our healers in the Temple -- seems to think it has to do with rats. You don't look like someone who'd be afraid of rats. Maybe you could talk to her, and offer your help."

"Almalexia and Vivec have always been among us -- our fathers and forefathers to many generations -- living and speaking gods and ancestors, guardians and heroes. Sotha Sil... He's the Father of Mysteries, and always kept to himself, but long ago even He used to appear now and then. That's the difference between the Temple and the Western faiths. We have gods who were once mortals. They understand what it is like to live, eat, sleep, suffer, worry... and to fear death."

"You know about Almsivi, the Living Gods of our Temple? Gods, but at the same time, living folks like you and me. Almalexia, the Lady of Mercy, walked the streets of Mournhold Herself, healed the sick, fed the poor -- gave them clothes from Her own hand. The same with Lord Vivec. Then, ten years ago, about the time of the Ghostfence, They stopped appearing in public -- needed all Almsivi's power for the Ghostfence, They said. High priests still talk with Them, but we don't see Them."

Mehra has the following spells available for sale: