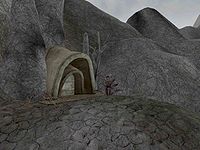 Helas Ancestral Tomb is a small tomb in the eastern Ashlands, located between the Ghostfence and Falensarano.

It can be found by starting at Ghostgate and heading east along the Ghostfence until you reach Sharapli. From Sharapli, head directly east across the hills until you find a path. The tomb is located on the right side near the end of the path as it heads north. There are two Shrines of the Tribunal here. You can find a single Daedra and two undead here. The loot consists of a few ingredients, an apprentice lockpick, and the skill books 36 Lessons of Vivec, Sermon 26 (Sneak) and Sermon 34 (Unarmored). A key found on the floor in the first room opens the trapped lock at the back of the tomb.

There are four known members of the Helas family:

There is no known relationship between the family and the Fair Helas docked at Ald Velothi. 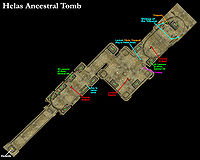