The UESPWiki – Your source for The Elder Scrolls since 1995
< Morrowind: Places
Jump to: navigation, search 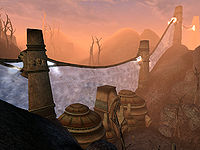 The Great Ghost Fence (usually shortened to simply 'the Ghostfence') is an enormous shield-like wall surrounding the crater of Red Mountain. Developed to keep the Blight and Corprus monsters contained within the Red Mountain Region, it is sustained by the Tribunal's combined powers. If it did not exist, it is reasonable to assume that the Blight and Corprus would have reached all areas of Vvardenfell. It was constructed in a similar style to that of standard Temple architecture. Its pillars are able to channel the holy energies of the Tribunal and the spirits of the deceased, converting them into a great impenetrable shield. Except for the tunnel through Kogoruhn, the only entrance to the Red Mountain Region is at Ghostgate, although it is possible to Levitate over the fence, and cliff racers are able to fly over it. 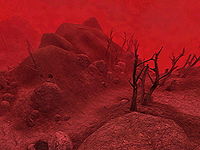 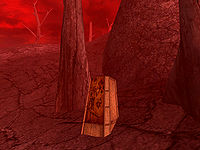 Shrine of Pride inside the Ghostfence

Outside the fence, it is placid and calm like any other place in the Ashlands. Inside, however, can be described as a hellish nightmare. The dreaded Blight constantly emanating from the crater of Red Mountain appears as a thick, blood red haze, similar in appearance to an Ashstorm. In addition, the sky appears completely different with thick, heavy clouds driven by exceptionally high winds. The landscape is dotted with numerous ancient Dwemer facilities. Since the disappearance of the Dwemer, these facilities serve as bases for Ash Vampires and, most notably, Dagoth Ur himself. These facilities were formerly known by their Dwemeri names. Now, they are referred to by the names of their inhabitants such as Vemynal, named after the Ash Vampire Vemyn.

Due to the effects of the Blight, Corprus monsters and assorted Blighted creatures reside within the fence. It is exceedingly dangerous to wander inside the fence. The most widely known way into the Ghostfence is by way of the gate at Ghostgate. This can be activated by a switch adjacent to the fence. Aside from the odd adventurer, the only people who enter the Ghostfence are Pilgrims of the Temple who wish to visit the Shrine of Pride. It is advised by the Temple that one should be relatively safe from the denizens of the area by simply fleeing at the first sign of trouble. This can be taken as an extreme under-estimation on the Temple's behalf and many Pilgrims choose to hire escorts to follow them into the Ghostfence for protection.

The fence, although impenetrable, has been known to have been breached on several occasions. There are alternate routes into and out of the fence speckled throughout Vvardenfell that Sixth House cultists and assorted kin of Dagoth Ur have used to escape. For example, the Sixth House tunneled under the Ghostfence and into their old stronghold of Kogoruhn in 3E 400.

Assorted Ordinators and Buoyant Armigers have also suggested that many monsters such as Corprus beasts have escaped the Ghostfence in an unknown fashion and had to have been hunted down and killed.