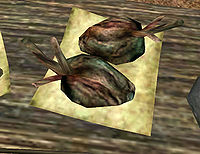 "The substance called ghoul heart is heart tissue collected from the remains of an ash ghoul."

Ghoul Hearts are incredibly rare, since there are no ghouls in Morrowind (contrary to the in-game description, they cannot be found on Ash Ghouls). They can only be found in a few locations or purchased from vendors.

This bug is fixed by the Morrowind Patch Project. As of version 1.6.4, Ghoul Hearts are indeed dropped by Ash Ghouls.

In addition to their rarity, Ghoul Hearts are also the only ingredient in vanilla Morrowind with a Fortify Attack effect. The Tribunal expansion adds one other ingredient with that effect.