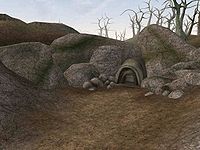 Salothran Ancestral Tomb is a medium-sized tomb located halfway between Andasreth and Bal Isra in the West Gash region.

You can find a Shrine of the Tribunal in this tomb. The enemies here are four undead and a single Daedra. There are five skeletal corpses in the final room, each with an exquisite ring and some minor loot. There is also a similar corpse here, but unlike the others it has fallen off its altar, and has an extravagant ring and some other minor items. Other than that, you'll find little loot here, consisting of a scroll, a few ingredients (including a ghoul heart), and a piece of weapon next to each corpse.

There are no known members of the Salothran family. 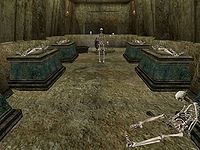 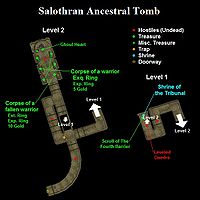