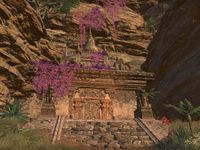 Sunspire is an ancient temple of Alkosh found in Northern Elsweyr. Sunspire has been overrun by dragons. Legend has it that this is the place where Alkosh shouted down Pelinal Whitestrake, leaving behind a timewound. Each boss in this trial will have a unique hardmode.

A golden-scaled dragon, Nahviintaas, has come to the Spire and proclaims himself to be Alkosh. With him are two other dragons: Yolnahkriin, a red dragon, and Lokkestiiz, a white dragon. These two claim to be avatars of the two moons, Jone and Jode. You are tasked with ending the tyrannical reign of these false-gods.
You must kill Yolnahkriin and Lokkestiiz in order to reach Nahviintaas. You can kill them in either order, and their deaths break the seal that blocks the way to the false-god of time. In order to engage Nahviintaas on hard mode, the other two bosses must first be fought in hard mode before him. Activating hard mode for Lokkestiz and Yolnahkriin will induce Nahviintaas into flying down from his place at the spire to aid them. Completing the trial on veteran will earn you a skin, and completion of a challenger-like achievement will earn you a Senche mount that wears the veteran skin.

You will receive a Pristine Dragon Heartscale with your other rewards for completing this trial on hard mode.

Most trial groups use names for groups of enemies that those unfamiliar with MMO jargon may not recognize. Non-boss enemies are referred to as "adds" or "trash", as the only function they serve is to hamper your progress before you reach the boss. Entering combat with a group of enemies is referred to as "pulling" them. A group of non-boss enemies may be referred to as a "pull", a "trash pull" or an "add pull" by some Trial groups. Generally, you don't want to pull a group of adds until everyone is ready.

An ice tomb will spawn around the edge of the arena opposite Lokkestiiz, a DPS will need to enter at full health and be healed out of the tomb that traps them, which places a defile on them and deals DoT damage to them while they're entombed, these also place a debuff on the dps, so that they cannot go in a tomb until a further two have already been completed. The tombs spawn on a timer.
Storm and Frost Atronachs will spawn in during the fight, the Frost Atronachs are not killable through normal means, instead, DPS should focus the Storm Atronachs, and the Off-Tank should move the Frost Atronachs through the puddle left behind by the Storm Atronachs.
At 80%, 50%, and 20% health, Lokkestiiz will fly up into the air and the group will have to deal with further Storm and Frost Atronachs as before, additionally, Lokkestiiz will fly down to the side of the platform and cast a beam over the group, which should be blocked as it passes through you.

On Hard Mode, the number of tombs per cycle is increased from one to two, one DPS should go in first and be healed out by the tomb healer, and then the other DPS should go in. This increases the number of DPS required for the tomb mechanic from three to six.
The beam that Lokkestiiz casts during the fly phase now puts a DoT and an AoE on you in addition to the instant damaging hit. This should be blocked and shielded, and then the shield re-cast as needed until the effect goes away, you should also make sure that your AoE doesn't touch anyone elses during this phase.
Additionally, Flame Atronachs will now spawn during the fight, these should be taunted by your Off-Tank and dragged under Lokkestiiz.

At 90%, 70%, and 50% health, three portals will open and three DPS have to go in and kill the Eternal Servant within the time limit of 90 seconds. At 80%, 60%, and 40%, Nahviintaas will fly up into the air and the group will have to deal with adds. After add phase, numerous circular fire AoEs will appear on the ground. On Veteran difficulty, this will be followed a large fire AoE that covers the entire arena, and the group must hide behind one of four Vigil Statues to avoid being one-shot. During execute phase, molten meteors target three players at once, who must take them to sides of the arena to avoid the AoE landing in group.

On Hard Mode, a Vigil Statue comes to life after each fire AoE phase. These will be invulnerable to damage except when channeling an ability that throws stone debris at the group. During execute phase, the molten meteor AoEs last permanently and Nahviintaas must be killed before they cover the entire arena. 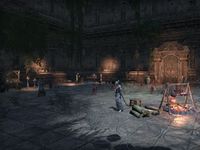 This is the entrance of the trial and acts as a starting area. It contains one of each type of crafting station, a mystic, and a general goods merchant. Azin-jo's Journal is sat upon a stool by the cooking fire.

Priest Adahni greets you after you enter the temple's first hallway from the door in the vestibule. Several unnamed cats are located here, and there are plenty of containers for you to loot which can contain Elsweyr furnishing patterns. A scroll titled The Blessings of Jone and Jode is sat upon a sofa which lies on the eastern side in the southern half of the first hallway. Two Acolytes of Alkosh pray on either side of this hallway near the book. Priest Kazafar stands near the door leading into the first area with enemies.

The courtyard beyond the door is full of supplicants. Nahviintaas, a shining gold Dragon, greets you here. Mojha, one of the Dragons' captives, tells you to run away, as the Dragons will enslave you. The supplicants scatter, and the Khajiit in the courtyard become hostile. There are four Sunspire Archers, two Sunspire Menders and two Alkosh's Roars in this first group of enemies.

The Way of Jode is through the door up the stairs to the left. This path leads directly to Lokkestiiz's roost. You will encounter Jone's Gale-Claws here.

The Way of Jode

The Way of Jode is through the door up the stairs to the right. This path leads directly to Yolnahkriin's roost. Jode's Fire-Fangs can be fought here. A Window for Escape is located south of the first large statue in the Shrine of Jode.

Lokkestiiz is located on the east side of the grounds, and Yolnahkriin is off to the west. Mojha is a Fool is located behind a wall on the west side of the area just before Yolnahkriin. An unnamed slave cowers in the corner next to the note while the enemies around it are still alive.

The door to the chancel opens once both Yolnahkriin and Lokkestiiz have been defeated. Nahviintaas is roosting up here, tearing the Time-Wound wider.

There are fourteen achievements associated with this trial. 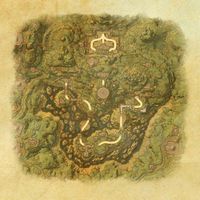 A map of Sunspire

This Elder Scrolls Online-related article is a stub. You can help by expanding it.
Retrieved from "https://en.uesp.net/w/index.php?title=Online:Sunspire&oldid=2559232"
Categories:
Hidden categories: