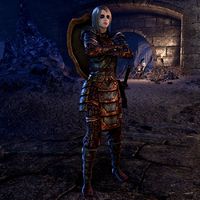 Micella Carlinus is an Imperial soldier found inside the White-Gold Tower. While she is initially friendly, she along with the other two elite guards must be killed later on as part of the second boss encounter. She wields a sword and shield in combat.

In the Palace Sewers:

"This is no place for dawdling. Move along. Preferably back the way you came."

Once you agree to help the group:

"Sister Arminus assures us you're to play a vital role, today.
Of course, she also said that we're standing on a pinion of reality, that we have no idea how lucky we are we haven't been whisked into the cosmic beyond. And then she laughed about it."
Is Sister Arminus sane?
"You'd better hope she is. You're the one who agreed to help her."

After killing The Adjudicator, Micella can be asked about how the Daedra took over the tower.

"Watch your back. Only the Divines know how long these beasts have been lurking here. Empty rooms are never quite empty when Daedra are involved."
How did they take the Tower?
"The Dark Anchor above the Tower was the one of the first to materialize over the city. We had never seen anything like it.
It wasn't a question of whether to evacuate, but how quickly we could do it."

Once Sister Terran reveals the Elder Scroll to the Empress Regent, the following happens:

"Check the bodies. None of them are to leave alive."
"Confirm that they're dead. Then kill the priest."
"Make certain they're dead. We have to catch up with the Empress."

Unlike most other bosses, Micella Carlinus is not immune to crowd control effects. Players should use this to their advantage. Micella's attacks are similar to many player skills, and have almost identical associated effects. The boss's attacks are identical in both Normal and Veteran mode, the only difference is that in Veteran mode she has more health and does more damage.

Empowering Chains
The boss pulls a player towards herself from far away, doing moderate flame damage as well.
Deep Slash
The boss slashes the target's legs, slowing them down and doing moderate physical damage.
Flame Lash
The boss strikes at a target, doing moderate flame damage.
Pierce Armor
The boss stabs the target, lowering their armor and spell resistance.
Engulfing Flames
The boss breathes fire in a cone in the direction he is facing. This attack does moderate flame damage over time to all enemies hit by it.
Corrosive Armor
The boss surrounds herself in a protective field, reducing the damage she takes greatly, while doing minor flame damage to all players around her as indicated by a red circle. She only does this once, and usually when she is low on health.
Standard of Might
The boss drops a banner at her position, doing high flame damage over time to all players as indicated by a red circle. As her allies die, Micella will use this ability more often. This attack is usually accompanied by a voice clip ("For the Ruby Throne!", or "For Clivia Tharn!"), which warns players to move away as soon as possible.
Break Free
If stunned or slowed, the boss can break free giving herself CC immunity for about 5 seconds.
Molten Weapons
The boss charges her weapons with flame, thus every attack she performs has a chance to proc the "Burning" effect on the player, doing minor flame damage over time.
Empower
If he is near her allies, Micella gains a buff that increases her damage done and reduces her damage taken. The boss will glow red when this buff is active. The tank can try to separate her from her allies to prevent this.