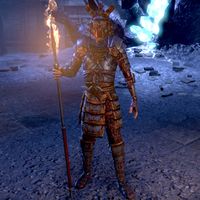 Otho Numida is an Imperial soldier found inside the White-Gold Tower. While he is initially friendly, he along with the other two elite guards must be killed later on as part of the second boss encounter. He wields a staff in combat.

He can be spoken to outside the tower where he can tell you about why they are there as well as the recent return of the Empress Regent.

"The Priest made us wait all this time...for you? I expected an army. I hope you know what you just signed up for, stranger."
What's going on here?
"Like most of the city around us, the White-Gold Tower has been occupied by Daedra. Every attempt to retake it has met with failure.
But with the return of the Empress Regent, hope, too, has returned. We are prepared to make a final assault."
The Empress Regent was missing?
"We thought she was among those killed when the Dark Anchors first assaulted the city.
But she has returned, alive and well, ready to take back the Tower."

After killing The Adjudicator:

Otho Numida: "Secure the perimeter!"
Cordius Pontifio: "The Empress should have been the first to set foot in the Palace."
Sister Terran Arminus: "We make for the library, and from there, the Elder Scroll!"

After killing Adjudicator, he has some suspicions that you and Sister Terran Arminus have a hidden plan.

"Sister Arminus was right about one thing: you know how to kill Daedra."
What did she say about me?
"That you would stroll in here and the Daedra would fall before you.
Listen, if the two of you are in on some kind of con, it won't end well."
Are you threatening me?
"You won't have my trust until this Tower is taken. No wrong moves, friend."

Once Sister Terran reveals the Elder Scroll to the Empress Regent, the following happens:

Unlike most other bosses, Otho Numida is not immune to crowd control effects. Players should use this to their advantage. Otho's attacks are similar to many player skills, and have almost identical associated effects. The boss's attacks are identical in both Normal and Veteran mode, the only difference is that in Veteran mode he has more health and does more damage.

Flare
A basic ranged attack that does moderate flame damage.
Flames of Oblivion
The boss surrounds himself in an aura of flame, doing moderate flame damage over time to all players around him as indicated by a red circle.
Focused Healing
The boss heals an ally over time, appearing as a white beam connecting him and his target. This attack can be interrupted to set the enemy off balance.
Healing Springs
The boss places a yellow circle around itself that heals all allies inside over time.
Ember Explosion
The boss teleports himself to get near his allies. This results in a burst of fire that deals flame damage.
Heat Wave
The boss releases many lies of fire outwards from himself, doing high flame damage to anyone hit.
Cinder Storm
The boss places an ash cloud on the ground, doing moderate flame damage over time and snaring any player within.
Engulfing Flames
The boss breathes fire in a cone in the direction he is facing. This attack does moderate flame damage over time to all enemies hit by it.
Corrosive Armor
The boss surrounds himself in a protective field, reducing the damage he takes greatly, while doing minor flame damage to all players around him as indicated by a red circle. He only does this once, and usually when he is low on health.
Standard of Might
The boss drops a banner at his position, doing high flame damage over time to all players as indicated by a red circle. As his allies die, Otho will use this ability more often. This attack is usually accompanied by a voice clip ("For the Ruby Throne!", or "For Clivia Tharn!"), which warns players to move away as soon as possible.
Break Free
If stunned or slowed, the boss can break free giving himself CC immunity for about 5 seconds.
Molten Weapons
The boss charges his weapons with flame, thus every attack he performs has a chance to proc the "Burning" effect on the player, doing minor flame damage over time.
Empower
If he is near his allies, Otho gains a buff that increases his damage done and reduces his damage taken. The boss will glow red when this buff is active. The tank can try to separate him from his allies to prevent this.