Ancestral home of the Direfrost clan, this frozen castle has long been sealed to the outside world, its owners neither seen nor heard from in generations. Mountain storms rage above the castle walls, conjured up by some unknown malignant power. 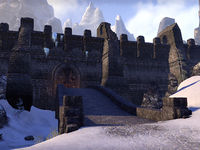 Direfrost Keep is a group dungeon found in Eastmarch. Once the ancestral home of the witch hunting Direfrost clan, the castle has been abandoned following an attack by the ice witch Drodda. A surviving member of the clan, Eboric Direfrost, needs your help to reclaim his home. You can learn about its location from Untouchable Naim outside Velyn Harbor, Twice-Lucky in Sentinel, or Felvyn the Swordarm in Windhelm.

Its dungeon sets are Draugr Hulk, Magicka Furnace, and The Ice Furnace.

A chest can spawn under the bridge leading to the keep's main gate, and on top of the sewer grate that leads into the dungeon.

These named enemies have two pips around their health bar to indicate their difficulty.

These named enemies have three pips around their health bar to indicate their difficulty.