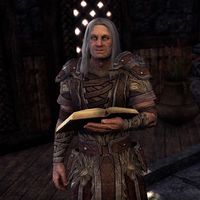 Eboric Direfrost is a Nord member of the Mages Guild found in the hall located in the city of Windhelm.

When you approach him, he's reading a book from which he apparently discovers some exciting news:

"This is a day I'll long remember! After months of searching I've finally discovered the location of my ancestral estate. It's not far from here! As soon as I pack my things, I'm off to claim my rightful inheritance as the Heir of Direfrost Keep!"

Upon arriving at Direfrost Keep, it will quickly become clear that Eboric's claiming of his inheritance did not go as planned. At the side entrance of the Keep the Speaking Stone was left to explain:

Eboric Direfrost: "I am Eboric Direfrost, of Falkreath.
In the record vaults of Windhelm, I discovered that I am the last living heir of Direfrost Keep, a vast castle that my family funded through generations of witch-hunting."
"The Keep has been abandoned for ages, sealed by unyielding frost—the locals say that it is haunted. Despite this, I hope to reclaim my ancestral home.
Should ill-fortune befall me, I have left the Speaking Stones behind to tell my tale."

Throughout the Keep, Eboric left more speaking stones to detail his progress. Coming across many frozen figures, after defeating Teethnasher the Frostbound:

Eboric Direfrost: "A horrifying sight! The residents of Direfrost Keep appear to have been fleeing, but now they are frozen in time, trapped in this icy tomb for all eternity."

In the large room containing the Direfrost Flame:

Eboric Direfrost: "This is the Direfrost Flame I read about in Windhelm. Legend has it I can contact my ancestors if I light it. I'd like to know what happened here."
"According to my notes, I need a relic called the Torch of Heirs to light the Flame, located in the Hall of the Dead.
My map shows the Hall down this side passage, it seems."

In the draugr-infested Halls of the Dead:

Eboric Direfrost: "So there are Draugr in this Keep as well. How long has the Keep been in disuse?
Today keeps getting better and better."

In the room with the two pressure-plates:

Eboric Direfrost: "I've traveled here for naught. The gate to the crypt is locked, probably by the pair of pressure plates here. And me with no companion.
Without the Torch, I can't light the Flame. Regrettable, but I'll return. I've yet to explore the summit."

Upstairs from the Direfrost Flame:

In the passage leading up to the summit:

Eboric Direfrost: "The "Transmute Fog" spell turned out more useful that I thought. Would never have gotten through the last door without it."
"And now for the summit. There are many reasons not to go.
I can hear blasting winds at the top of that ladder, and there is a chill that strikes the bone. Any manner of beast could be waiting for me. But I will not shame my family by walking away." 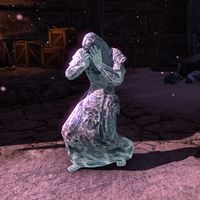 When you reach the summit, you find Eboric frozen.

<You recognize this figure's familiar face from the images projected by the Speaking Stones. It is none other than Eboric Direfrost, his features frozen in abject horror.>

After Drodda of Icereach is defeated, Eboric will defrost.

Eboric Direfrost: It's frosty as the edge of Skyrim up here!"

When he is spoken to:

"By the Eight it's cold! I … where am I?"
The witch Drodda froze you with a spell. She's dead now.
"You've saved my life.
I spoke at length with that witch—with Drodda, before she cast me in ice. My family has caused her, and many of her kind, much grief. I will restore this Keep, but no more will it be a headquarters for witch-hunting."

Once Nobles' Rest completed, Eboric has some final words:

"Feel free to return. Soon, I'll have this place looking as grand as it ever did.
All will be welcome. The locals … perhaps even witches, if they'll look to reform. Drodda claimed that witches are not evil. We'll see."
You're going to help witches?
"Not exactly. I'm a Direfrost, after all. But I won't hunt them, either. According to Drodda, we've caused them much suffering.
If she's telling the truth, perhaps my ancestors deserved what happened to them. I have some contemplation to do."