The UESPWiki – Your source for The Elder Scrolls since 1995
< Lore: Places: I(Redirected from Lore:Imperial Prison)
Jump to: navigation, search 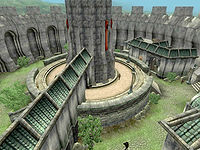 The Imperial City Prison (also called the Imperial Prison or the Imperial Dungeons) is located in the Prison District of the Imperial City, connected by bridge to the Market District. It is infamous for its impregnability, although several secret escape tunnels connect up to the ancient subterrane and the prison sewers beneath.

In 2E 582, Molag Bal began his attempted Planemeld by opening a portal to Coldharbour above the skies of the Imperial City. The city quickly fell, with Daedra raining down from above and the Worm Cult and Imperial Legion turning traitor from within. At the time, the prison was under the command of Captain Ululmalit, who refused to turn traitor. The Daedra quickly overran the prison complex, imprisoning Ululmalit and killing most other legionnaires.[1] Command of the prison was then given to Dusk, a Grievous Twilight who declared himself "Lord Warden". Dusk and his council of Xivkyn retreated deep into the distorted caverns that had formed beneath the prison, maintaining control of the complex through the deployment of watchers. The Daedra then proceeded to conduct heinous experiments on mortal captives from the Imperial City, turning them into Mind-Shriven or conducting necromantic "flesh sculpting" with their corpses.[2]

As the Alliance War raged on, provincial forces entered the city to liberate it from the Daedra, and the Undaunted arrived at the Imperial City Prison to free the countless mortal prisoners within. The Dremora Lyranth offered to guide them through the complex so that they could defeat Lord Warden Dusk and free her clan, the Foolkillers, from their eternal entrapment. The Undaunted fought through the Daedric forces and banished Dusk, whose vestige was soultrapped by the vengeful Lyranth. However, she then ordered the mortals to leave and took control of the now-empty prison for her lord Molag Bal.[2] Lyranth would later restore the Foolkillers to power in Coldharbour,[3] and after the end of the Planemeld the prison was eventually restored to Imperial control.

At the start of the Imperial Simulacrum, the future Eternal Champion was thrown into a cell deep in the Imperial City Prison on the orders of Jagar Tharn and left to die. With guidance from the spirit of Ria Silmane, the Champion escaped his cell and fought his way to freedom by travelling through a Shift Gate.[4] For over forty years following the Champion's departure, not a single prisoner escaped from the Imperial City Prison.[5] This changed in 3E 433, when the future Champion of Cyrodiil was pardoned by Emperor Uriel Septim VII, who was passing through the Champion's cell along a secret escape route. Guarded by his Blades, the Emperor was fleeing the city while pursued by assassins from the Mythic Dawn. However, the cultists knew of the existence of the prison's escape route and succeeded in killing the Emperor, triggering the Oblivion Crisis. Before his death, Emperor Uriel gave the Amulet of Kings to the Champion, delaying the cult long enough for the Blades to rescue his illegitimate son Martin. Following the assassination, the prison sewers and subterrane were sealed and occupied by the Imperial Legion, who conducted an investigation into how the events had been allowed to transpire. Despite being heavily guarded, the secret route was exploited that same year by the Dark Brotherhood in order to reach a mark within the prison.[6]

In 4E 40, wormies under the control of Umbriel began besieging the Prison District as the floating city approached White-Gold Tower. They actively attempted to break through the gate into the district, and swarmed City Isle in such numbers that the Legion was unable to push them back from the city walls. As Umbriel approached the city from the northeast, it seemed likely that it would pass over the prison and turn all those within into undead wormies. However, it was banished from the Mundus before this could happen, killing the besieging army.[7]