The UESPWiki – Your source for The Elder Scrolls since 1995
< Elder Scrolls Online: Places: Craglorn / Arenas / Ruins
Jump to: navigation, search

The Dragonstar Arena is a group-based arena in Upper Craglorn.

It is similar to the Trials in Craglorn, but is aimed at groups of four players rather than twelve. It comprises numerous waves of enemies across ten arena environments, and has both a Normal and Veteran mode. Veteran runs are recorded on a leaderboard system.

You cannot respawn at the wayshrine until your entire team has been defeated, making soul gems a necessity for mid-fight resurrecting. A scamp named Kizna offers basic services in between rounds. Fighting in the arena grants access to loot chests after every round, which can contain items from several unique, powerful sets.

A Swarming Wasp's nest is located along the road leading up to the Dragonstar Arena. The Snatch and Grab is at the base of the stairs leading up the hill to where the gladiator teams' camps are set up. Arena Enforcers patrol the Arena's exterior. The Inscrutable Enigma is beside a tent and a campfire all by her lonesome on the ledge to the right of the ruins leading into the Arena proper.

A group of Legion soldiers called the Diamond's Daughters is camped out west of the entrance. Dorzogg's Dozen is set up west of the Diamond's Daughters. The Ballad of Dorzogg the Gutter-King can be found on a cart next to the eponymous Orc. The Blood Feathers are camped out on the west side of the lower hill, south of Dorzogg's Dozen. Blood-Feathers Battle Slogans can be found on a cot under one of their small brown tents. The Blood-Feathers have a cooking fire in their camp.

Dragonstar Arena has both a Normal and a Veteran Mode, which can be accessed by changing your group settings before entering the ruins. Unlike group dungeons, the two versions are identical aside from mob difficulty.

Once inside, Hiath the Battlemaster will provide rudimentary instructions. Speak with Milia the Gatekeeper to begin the first round. After each round, you will be given access to the merchant Kizna, a Chest of Champions, and a portal to the next round. Hiath will commentate the rounds, occasionally interspersed with the voice of his master, the Daedric Prince Boethiah. 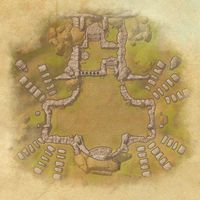 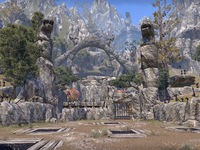 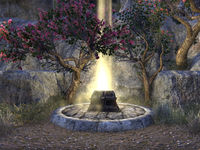 The first round is relatively easy. You will be pitted against Fighters Guild enemies, two of which make use of the related skill line. The arena is covered in spike traps, although they are easily avoided and can be used to your advantage. This round has many healers, who can become a problem if you don't take them out quickly. The final boss is Champion Marcauld. There are two enemies of note: 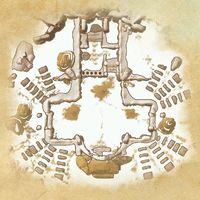 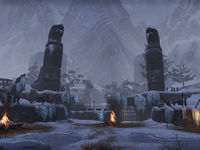 In this round you will be fighting Sovngarde Nord enemies, along with trolls, bears and ice wraiths. The arena contains three large fires, which you will need to fight beside and keep lit to avoid taking periodic damage from the icy conditions. The bosses are Yavni Frost-Skin and Katti Ice-Turner. 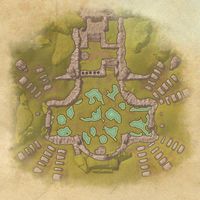 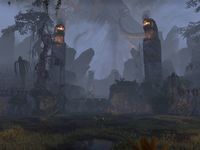 In this round you will fight against Dragonclaw Reachmen, along with stranglers, wamasu, nereids and corprus husks. Poisonous clouds will randomly spawn in the arena, and will deal massive damage if you touch them. The bosses are Nak'tah and Shilia. 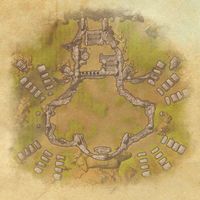 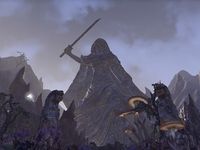 In this round you face Dunmer enemies from House Dres, as well as kwama, netches and kagouti. Suitably, the arena is reminiscent of Morrowind. The Dres Enslavers have a special attack that attaches a blue chain to one of your group members, turning them to stone unless interrupted. The boss is the Earthen Heart Knight, who obviously makes use of the Earthen Heart skill line. 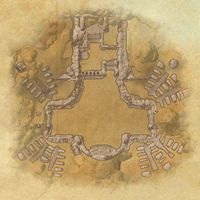 This arena is modeled after Lower Craglorn. You will be facing off against the Anka-Ra warriors and enemy gargoyles in a sandy arena covered in constellation stones. The Anka-Ra Shadowcasters have an ability to mark a player for death via "Celestial Blast", which can only be prevented by rushing to the highlighted constellation and standing there until the effect wears off. The boss of this round is Anal'a Tu'wha. 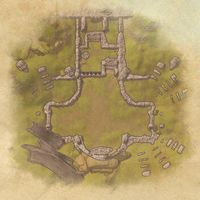 In this round you will fight against Pacthunter Bosmer, along with werewolves, spriggans and lurchers. Aside from the Bosmer, every enemy will leave behind a green AoE upon death, which converts health into magicka when you stand in it. Although dangerous, this can be useful, as the archer enemies directly damage your magicka. The werewolves can heal by feeding on corpses. The boss is Pishna Longshot.

Round 7: The Circle of Rituals[edit] 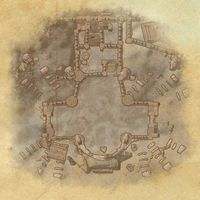 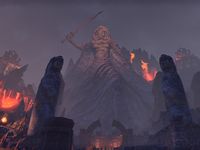 This round seemingly takes place in Oblivion, with a backdrop of Daedric ruins and lava. You will be fighting against Bloodwraith Dremora, banekin, daedroths, clannfear and spider daedra. The arena contains three altars, which Daedric Sacrifices will slowly walk towards constantly. If you don't kill them in time, these prisoners will be transformed into "Sacrificial Summons", which can either be a scamp or a Daedric Titan. Note that the sacrifices continue appearing even if your group isn't in combat, creating an unkillable stack of Titans that can only be cleared by dying. The bosses are the Shadow Knight and the Dark Mage. The mage can fully heal herself if not interrupted, and the knight can use Nova. 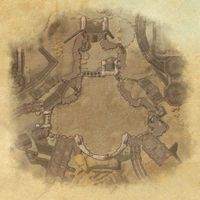 This round has a Dwemer style, and you will be fighting against Dwarven Automatons and enslaved mages. The Ice Centurions that spawn need to be taken down quickly, as they can freeze you in place or surround you with a slowing AoE. The Fire Centurions perform a powerful spinning AoE, which will need to be tanked or kited. The boss is Mavus Talnarith, who makes use of Mages Guild skills.

Round 9: Crypts of the Lost[edit] 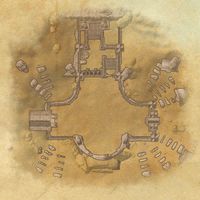 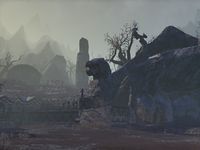 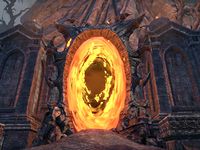 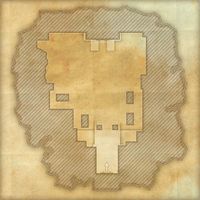 This round takes place in a graveyard, and you will be faced with undead enemies. These include Graveoath skeletons, ghosts and wraiths. The arena is dotted with "holes" in the ground, where skeletons will pull you down and force you to fight your way to a portal back to the arena, although they can easily be avoided. The boss is Vampire Lord Thisa, who can make use of the Vampirism skill tree. Her Bat Swarm ability can quickly kill your group, so its advisable to have the tank taunt her away until the attack ends. 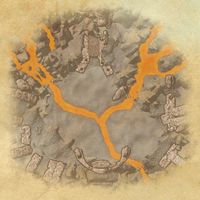 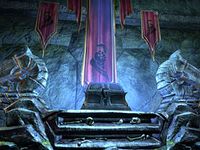 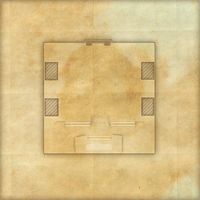 The final round takes place in Boethiah's realm of Oblivion. Unlike the previous rounds, it is a single, prolonged boss fight with no checkpoints or waves of enemies. You will be fighting Boethiah's Champion, Hiath the Battlemaster. He will periodically surround everyone with a powerful fiery AoE, which will follow you for a few seconds before dropping on the ground and remaining in place for a long time, creating additional hazards. The arena is divided into three islands separated by streams of lava, so it will become necessary to rotate islands once the fire builds up too much. The healer of the group will need to make sure that your team mates stay close enough to be healed, but not so close as to overlap AoE effects and start stacking damage.

As Hiath's health decreases, he will begin to summon bosses from previous rounds. He will summon a warrior and a mage each time; the mage should be prioritised due to their lower health and powerful attacks. At 75% health, he will summon Champion Marcauld and Mavus Talnarith, the two guild bosses. At 50%, he will summon Yavni Frost-Skin and the Dark Mage. At 25%, he will summon the Earthen Heart Knight and Pishna Longshot. Focus on the additional bosses before resuming your attacks on Hiath. The tank will need to occupy Hiath and possibly the warrior enemy while other members deal damage.

Once you've defeated Hiath, Boethiah will create four pillars of light and lift you into the sky, and you will earn the Dragonstar Arena Champion achievement if this is your first time. Your group will be returned to a special room in Dragonstar Arena, containing a chest called Champion's Treasure and a book titled Boethiah's Call of Champions. Exit the room to be returned to Craglorn.

There are 2 Achievements associated with this location: