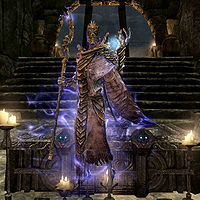 Otar the Mad is one of the eight high-ranked dragon priests in Skyrim. He is found in Ragnvald, in a locked coffin before the barrow's word wall. To get to him, you have to defeat his two keepers—Torsten and Saerek—and take their skull keys.

He carries his eponymous mask, Otar, which increases resistance to shock, fire, and frost damage. His weapon is the unique Staff of the Storm Wall.