The UESPWiki – Your source for The Elder Scrolls since 1995
< Skyrim: Quests: Miscellaneous / Dungeon Quests
Jump to: navigation, search

According to legend, the ancient ruin of Ragnvald was once populated by Nords and ruled by a fearsome chieftain named Otar. At some point, Otar went mad due to evil voices within his head and turned into a servant of the ancient dragons, causing havoc and leading to dark times in Ragnvald. Eventually, the Nords decided to stop Otar and sent in two champions, Torsten and Saerek. Although they couldn't destroy him, they managed to seal him off inside the ruin, using separate keys to ensure he never escaped from his containment. Ragnvald has long since been abandoned, but the Markarth guards are aware of the dangers lurking within, and will rightfully warn you about the place: "There's an evil to the north, friend, and its name is Ragnvald. A tomb like so many in Skyrim, where the dead have found no peace."

Straight north of Salvius Farm, an unmarked path will start in the middle of nowhere, leading directly to the huge exterior area of Ragnvald. The ruin is only guarded by two draugr enemies, but the area is otherwise devoid of life and sound. Enter Ragnvald Temple through the main gate and proceed through the nearly destroyed first chamber with a dead draugr on a table. Take the only available path downwards and keep an eye out for helpful potions and minor loot along the way. The path will eventually lead to a large, complex chamber guarded by three leveled draugr. Fight them and proceed in a western direction until you face an odd-looking sarcophagus in front of a set of stairs leading to sealed area. Touch one of the empty slots and read the inscription. The quest will trigger at this point and add map markers to the two items needed, located in different zones within Ragnvald.

As told in the legend, the next step is to claim Saerek's Skull Key and Torsten's Skull Key from the heroes that managed to seal off Otar the Mad back in ancient times. The two guardians still protect the keys with their lives, and you will have to fight both of them to complete this quest. Check the map markers for doors leading in two different directions and choose which zone to enter first, Ragnvald Canal or Ragnvald Crypts. 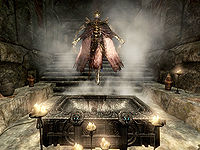 With both Skull Keys in your possession, return to the sealed sarcophagus in the eastern part of Ragnvald Temple and insert them into the empty slots. The locks will then disappear, and before long, Dragon Priest Otar the Mad will emerge. Otar uses shock as his primary weapon. He tends to summon a storm atronach in the beginning of the fight, and he also uses the unique Staff of the Storm Wall with very high Shock damage. Otar will rarely follow you if you stay away from him, but he will bombard you with his staff that casts Wall of Storms. Otar does use the Thu'um, but he only uses Disarm. The Unrelenting Force shout is ineffective against him. He can prove to be a challenging enemy to face, especially at low levels.

After the battle, it is time for your reward. From Otar's corpse, claim his valuable staff, the Dragon Priest Mask Otar with resist shock, fire and frost enchantments, along with a huge amount of gold. In the chamber behind the sarcophagus, the boss-leveled chest holds even more gold, while the word wall in the back of the chamber provides a word for the Kyne's Peace shout. When all is said and done, reclaim the two Skull Keys from the sarcophagus, as they can be sold for a high price, and exit Ragnvald the way you came.