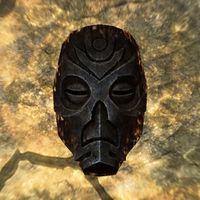 Nahkriin is an ebony dragon priest mask obtained by killing the eponymous Nahkriin, who is encountered during the main quest at Skuldafn. It is imbued with an enchantment that grants the wearer a Fortify Magicka effect that gives the wearer an additional fifty points of magicka. The enchantment also decreases the cost of spells in the Destruction and Restoration schools by twenty percent, due to its Fortify Destruction and Fortify Restoration effect. It can be tempered with ebony ingots.