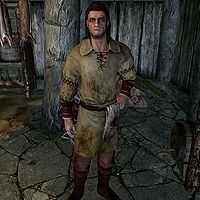 Orgnar is the Nord barkeeper at the Sleeping Giant Inn in Riverwood. He is the somewhat sullen employee of Delphine, who owns the inn, and the two snipe at each other over business matters.

When you speak to him, you may ask if he knows any leads that you could follow for work. He will then provide you with a local bounty that was recently delivered.

He wears a set of lower class clothing and a pair of shoes. He carries common loot and gold as well as a key to the inn. He wields an iron dagger and iron mace.

Orgnar may greet the player with any of the following lines:

Orgnar says any of the following when asked for rumors:

"Word is Ulfric Stormcloak escaped from the Imperials. War's only going to get worse, now."
"They say a dragon attacked Helgen. Sounds like hogwash to me."
"We've got something of a love triangle here in Riverwood. Faendal and Sven, both vying for Camilla's affections."
"Lucan at the Riverwood Trader had his store broken into the other night. Oddly enough, barely anything's been stolen."
"There have been whispers. A boy, up in Windhelm, name of Aventus Aretino. Been trying to contact... the Dark Brotherhood."

Do you know about Delphine's... activities?
"That's her business. Not mine. Probably not yours either."

During the quest Bleak Falls Barrow:

Where's the innkeeper?
"Out. She owns the place, she does what she wants."
So how do I rent a room?
"Inn's closed. Bar's still open, though. Feel free to sit and put your head down on the table for as long as you like. I won't bother you."

A Blade in the Dark[edit]

During A Blade in the Dark, he has a very short conversation with Delphine:

Delphine: "Orgnar. I'm travelling. You've got the inn 'til I get back."
Orgnar: "Right. Happy trails."

During Alduin's Wall, Delphine first asks another favor from Orgnar and then relinquishes the ownership of the inn to him:

Delphine: "Orgnar, hold down the bar for a minute, will you?"
Orgnar: "Yeah, sure."

Delphine: "Orgnar, this is it. The inn is yours. I'm probably never coming back here."
Orgnar: "Well, now. That's something to think about."
Delphine: "Take care of yourself, Orgnar. Goodbye."
Orgnar: "Yeah... sure. You, too, Delphine. You be safe."

Delphine: "Orgnar. Orgnar! Are you listening?"
Orgnar: "Hard not to."
Delphine: "The ale is going bad. We need to get a new batch. Did you hear me?"
Orgnar: "Yep. Ale's going bad."
Delphine: "I guess you don't have potatoes in your ears after all. Just make sure we get a fresh batch in soon."

Embry will talk to Orgnar in the inn:

Embry: "I need some more ale, Orgnar."
Orgnar: "You've had more than enough. Besides, you still haven't paid for the last one."
Embry: "I'll find some coin for you. I always do."
Orgnar: "Until then, I've no ale for you."

Patrons of the inn can also be overheard asking Orgnar for drinks:

Orgnar will give the same answer every time:

Orgnar and Delphine can have a couple of conversations in the inn:

Delphine: "The corn stores are getting low again, Orgnar." OR "You promised me you'd sweep the entranceway." OR "I still need you to make a batch of those fried potatoes. We can serve them with the ale." OR "You are going to brew a new batch of ale, right? Like we talked about? What we have's been sitting in that barrel for over a month."

Delphine: "I don't suppose I could convince you to take care of it now, could I?"

Delphine: "Well. There's something to be said for honesty, I suppose." OR "I should have guessed."