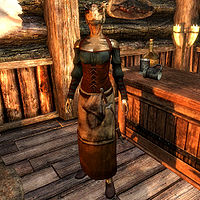 Keerava in the Bee and Barb

Keerava is an Argonian innkeeper in Riften. She tends The Bee and Barb alongside Talen-Jei.

Although she has a bed and a room in the inn, she never sleeps and is found behind the bar almost every moment of every day.

She wears some barkeep clothes and some shoes. She wields a leveled dagger, which can be up to elven quality, and carries a selection of common loot and gold, a key to her inn, and her own key.

When you first enter The Bee and Barb, she can be seen having the following argument with Maramal:

Maramal: "People of Riften, heed my words. The return of the dragons is not mere coincidence."
Maramal: "This is one of the signs. The signs that Lady Mara is displeased with your constant inebriation."
Maramal: "Put down your flagons filled with your vile liquids and embrace the teachings of the handmaiden of Kyne."
Keerava: "No, no... Maramal... we talked about this. Talen..."
Maramal: "Keerava, certainly we can come to an understanding. These people must be made aware of the chaos they've sown."
Talen-Jei: "Enough, Maramal. We've all heard of the dragons and their return. There's no need to use them as an excuse to harass our customers."
Maramal: "Very well, Talen. I'll remove myself from this den of iniquity."
Talen-Jei: "We're not kicking you out, just keep the sermons at the temple and let us all sin in peace."

She seems in desperate need of coin.

If you've muscled her into paying Brynjolf's debt, she'll greet you with:

She often checks up on you.

Keerava: "What can I get you? Mead? Wine?"
Keerava: "Looking for a place to stay?"

If you ask her where you can learn more about magic, she'll point you in the right direction.

Where can I learn more about magic?
"Head north to Winterhold. There's a College there, they teach magic. Most Nords don't care for them.
Else you could go see the Jarl's wizard. Might be able to help you."

What's the word around town?
"Riften's biggest exports used to be fishing and honey, until the Black-Briar family moved in. Now the meadery is the biggest game in town."

"The city guard has been tearing Riften apart looking for the source of our skooma problem. I'd hate to be in their shoes if they get discovered."

"Sibbi Black-Briar is furious that his ex-lover tried to murder him. He's leaving no stone unturned searching for her."

"Mjoll the Lioness used to adventure across Skyrim before she settled down in Riften. I hear it all ended when she lost her enchanted blade."

"If Maven Black-Briar keeps raising prices on mead, I'll have to resort to watering it down just to make ends meet."

'"If it's true that the dragons have returned, what will it mean for all of us? Is this how it all ends?"

If the Thieves Guild is still on hard times, she'll say

"The Thieves Guild has been pushing hard to regain a foothold in this city. Rumor has it they're falling apart from the inside."

If they're back on their feet, she'll say

"Crime is at an all-time high in this city thanks to the Thieves Guild. Don't we have enough problems with the war going on?"

Keerava: "Come back and see us again."

Exiting conversation if you muscled her debt to Brynjolf out of her:

Keerava: "Door's over there. Why don't you use it?"

Occasionally, she'll call out to Talen-Jei.

Keerava: "Keep your scales on."

Sometimes, she'll call him over to serve a customer.

Keerava: "Hey, Talen... get off your lazy tail and take care of the customer!"

When you approach her for coin, she'll have some different greetings.

"Here for a room or something to drink? Show me some coin first."

"You want something or not?"
I have a message for you from Brynjolf.
"I'll [sic] already told that buffoon I'm not paying you people a single coin!"
It was never a request.
"Look around you, I'm barely keeping this rathole together. The war's seen to that."
It's out of my hands.
"Then go back to your boss and tell him what I've already told him so many times, I lose count.
His request is denied... I'm not paying him any more gold. This madness has to end."

You can give up.

I'm finished wasting my time talking to you.
"Good, and take this little message back to your bosses.
I'm not paying any of you a single septim... ever! Now get out of my inn!"

You can brawl to get the money out of her.

When you beat her she'll plea:

If you take the route suggested by Brynjolf and talk to Talen-Jei first:

Maybe I should visit that farm in Morrowind.
"How could you possibly know about... Please. My family means too much to me. Don't hurt them."
Then pay up and I'll forget about it.
"Very well. Here. Take this back to Brynjolf and tell him he'll have no more trouble from me."

If you have already visited the other two merchants, she'll immediately hand over the cash, saying

"Look, everything was all just a misunderstanding. I didn't mean to tell Brynjolf to go jump off the pier. You'll tell him I said sorry, yes?
Take this. Every single coin I owe is there, I swear it."

You can ask her about Esbern.

I'm looking for an old guy, hiding out somewhere in Riften.
"Never heard of anybody like that. But if you want to hide out in Riften, the Ratway's where you'd be.
There's a sort of tavern down there, the Ragged Flagon. Where all the lowlifes in Riften get drunk and knife each other.
You might try there, if you can get through the Ratway alive."

You can give her a pamphlet.

Here, sister. Blessings of Mara upon you.
"Look, the only religion I believe in is the good old septim. Everything else is just a waste."

Have you heard of Avanchnzel?
"Yes, Yes. It is an ancient and ruined city. Built by the Dwemer. The dwarf folk. It is nearby, but I'd stay clear. People say it is quite dangerous."

Keerava can often be seen conversing with Talen-Jei or her customers:

Talen-Jei: "Keerava, we're running low on Black-Briar Mead."
Keerava: "If only Maven would stop raising the price on it maybe I could afford to stock more cases."
Talen-Jei: "We could always look for another brand."
Keerava: "That isn't an option. Maven sees me serve a competitor's brand here and we may as well dig our own graves."

They talk about their finances.

Keerava: "Don't worry, the time will come when we can walk away from here."
Talen-Jei: "I hope so. I can't stand this city anymore."
Keerava: "Damn it, Talen. We still don't have enough this year to get out of Riften."

They'll also talk about the Dragons.

Keerava: "Talen, do you believe what they're saying? Do you really think the dragons have returned?"
Talen-Jei: "I don't know what to believe. If it's true, then dark times may be upon us."
Keerava: "What should we do?"
Talen-Jei: "We hold each other close and hope that all of this ends well."

She can be seen having a conversation with Indaryn.

Indaryn: "Why don't they listen to me, Keerava? Why won't they do as I say?"
Keerava: "Maybe they're afraid of you. Maybe it's your breath. How should I know?"
Indaryn: "They always try to take advantage of me. Give them an inch and they'll take a mile."
Keerava: "I'll tell you one thing, if you don't make peace with them soon you may get a walkout on your hands. Then we're both in trouble."

Romlyn Dreth: "Have I told you about Valen, my dear?"
Keerava: "I love when you spin that yarn. Gets better every time you add something new."
Romlyn Dreth: "He killed six Imperial Guards before they dragged him into the prisons."
Keerava: "Was this before or after the Mythic Dawn attacked the Emperor and Valen single-handedly fought them off? Just shut up and drink, Romlyn."