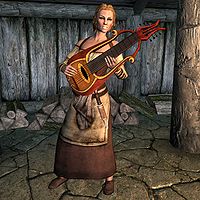 Lynly Star-Sung is a Nord bard working at the Vilemyr Inn in Ivarstead. She will take requests for five septims. If you use the persuasion option during dialog with her, Lynly will play a "special song" for free. When speaking to Wilhelm, she will state that she is unsure of her ability as a bard, and Wilhelm will boost her spirits by complimenting her on her skill.

Lynly's real name was Svidi. The dialog option to accuse her of being Svidi is not dependent on overhearing any conversation. When the player gets Lynly to confess, Lynly explains that she found poetry to her fiance Sibbi Black-Briar written by Svana Far-Shield. After confiding in her brother (named Wulfur according to Svana), he confronted Sibbi about the infidelity. Sibbi killed her unarmed brother, causing her to go into hiding.

Lynly wears a set of barkeep clothes along with a pair of shoes. She carries a belted tunic, a lute, and a selection of common loot and gold. She wields a leveled dagger, which can be up to Elven in quality.

This Skyrim-related article is a stub. You can help by expanding it.
Retrieved from "https://en.uesp.net/w/index.php?title=Skyrim:Lynly_Star-Sung&oldid=2246230"
Categories:
Hidden categories: