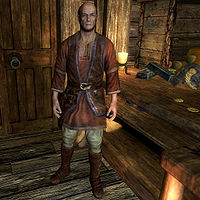 Bersi Honey-Hand is the Nord owner and vendor of the general goods store Pawned Prawn in Riften. His wife Drifa lives in the store with him. A former sailor, Bersi used to own a fishing boat, which he named the Brawny Prawn. After selling his boat, he named his shop to commemorate his former life.

Like many other citizens of Riften, Bersi is concerned about the rampant corruption within the city. Unlike most, he believes in improving the morality of the citizens through worship at the Temple of Mara. This has earned him the ridicule of many other citizens, who are convinced that the corruption runs too deep to be removed with prayers.

During the Thieves Guild quest Taking Care of Business, you are sent to retrieve protection money that Bersi owes the guild. He will agree to pay after being beaten in a brawl or after you destroy one of his prized possessions, a Dwemer urn.

Bersi will begin his day at 6am, having breakfast for two hours. From 8am until 1pm he will man the store, until sitting down with his wife to have lunch at 1pm for an hour. He will then man the store until 6pm, then have dinner for an hour. After this, he will roam around the Riften market until 11pm, browsing the stalls, sitting on the benches, and occasionally using the armor workbench next to The Scorched Hammer. From 11pm to midnight, he will stand at the counter in The Pawned Prawn, and at midnight he will go to sleep.

Bersi wears a set of merchant clothes along with a pair of boots. He carries his key to the store, a belted tunic, and a selection of common loot and gold. In combat, he relies on a leveled dagger which can be up to elven in quality.

When first spoken to:

I have a message from Brynjolf.
"Wha... what? Oh, it's one of you people. So, Brynjolf doesn't even bother to show up himself anymore, eh? What's this message?"

Simple. You don't pay, bad things happen.
"Petty threats and fist waving are not going to sway me. You people are all talk, and everyone knows it! Pay to protect me? You can't even protect yourselves!"

I think you know what it is.
"You're gouging me for what little coin I make and you can't even protect yourselves? Ridiculous!"

We can protect ourselves. Trust me.
"Don't fool yourself. It's only a matter of time before you people are run out of Riften."

I've had enough of this.
"Likewise. Now, I have a lot to do, so I'm afraid you'll just have to leave!"

I think you need to shut your mouth. (Brawl)
"I'm going to make you sorry for this!"

If spoken to again before destroying the urn:

"Please, reconsider what you're doing. Maybe I can pay later..."
"I'm sorry, you're going to have to leave. Tell Brynjolf he'll just have to make due without my coin."

If you destroy the urn he has:

"No! That urn was priceless!"
You want me to break anything else?
"All right! I get it. I'll pay on time from now on. Just don't smash anything else. Here, take your gold and leave me in peace."

If you decide to brawl and win:

If you choose to destroy the urn before even speaking to him:

That was from Brynjolf. Get the message?
"I can't believe you did that. You people are monsters! You demand payment for protection and you can't even protect yourselves. Here, take your coin and tell Brynjolf to leave us alone."

If you have already collected debts from the other debtors he will instead give you the money:

I have a message from Brynjolf.
"Oh! There's no need for that. I know why you're here. Tell Brynjolf not to worry about it anymore. Oh! And look, I even have the payment I owed. Here, take it."

In his shop, he will greet you with:

Should you meet him outside his shop, he will invite you to the Prawn:

"If you're looking for anything to sell for a fair price, I run the Pawned Prawn over by the market."

When spoken to directly he can be asked questions about himself and his business:

Your shop has a most unusual name.
"Catchy, isn't it? In my youth I was a fisherman... I had a beautiful ship named "The Brawny Prawn." But the years have a way of creeping up on you. I ended up selling that ship to open this place. Seemed only fitting to name it after her. Well, changed it a bit I suppose. If I had been smarter, I would have kept my boat. Coming to this city was a big mistake."

What's wrong with Riften?
"The question is, what isn't wrong with Riften. This city is corrupt. Rotten to the core. No one cares about anything except themselves and how much coin they can make off the misery of others."

Maybe you should speak to the authorities.
"Authorities? Have you been listening to what I said? They're all dirty. Every one of them. The only way to get things done in this city is to keep your head down and pay off the right people."

Tell me about the Thieves Guild.
"They used to be pretty feared around here. I mean, you'd whisper the name and it'd send chills down your spine. Now, they're nothing more than ruffians and thugs trying to pry a few extra coin from honest people. All it would take is a small force of guard to go into the Ratway and flush them out."

What's the Ratway?
"It's our name for the old sewers that run under the city. It used to be a huge system hundreds of years ago but it fell into decay just like the rest of Riften. The Guild stocks the place full of thugs that aren't good enough to join, so watch yourself if you venture down there."

Bersi may be seen having random conversations with his wife Drifa:

Bersi Honey-Hand: "Drifa? I was looking through our books and there's an entry for "spices." [sic] Says we spent 300 septims. What is that?"
Drifa: "Spices? I'm certain I have no idea what you're talking about."
Bersi Honey-Hand: "You sure? It was in your handwriting. If you can't keep the books straight then let me do them."
Drifa: "Oh, yes... spices. That was a special order for someone in Whiterun. Should be along any day now. Don't let it worry you, my dear."

Drifa: "You keep giving and giving Bersi, and they'll keep taking and taking. When is it going to end?"
Bersi Honey-Hand: "What would you have me do, woman? Cross the Guild? Take them all on one by one?"
Drifa: "You know I don't mean that. We need to find a way out of this. Perhaps talk to Laila..."
Bersi Honey-Hand: "Laila is as clueless as she is stupid. No. If anything's to be done about this, we have to deal with it ourselves."