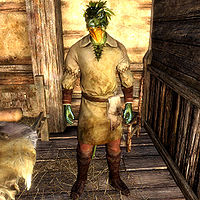 Talen-Jei at the Bee and Barb

Talen-Jei is an Argonian living in Riften who works at the Bee and Barb. He reveals that he is smitten over Keerava and is planning to marry her. You can offer to help him complete his wedding ring in the Black Marsh tradition.

Talen-Jei wears a set of barkeep clothes along with a pair of shoes. He carries his key to the inn, a belted tunic, and a selection common loot and gold. He also carries one bottle of the Velvet LeChance, White-Gold Tower, and Cliff Racer wines. In combat, he relies on a leveled dagger which can be up to Elven in quality.

As you enter the tavern, Talen may greet you.

"Welcome to the Bee and Barb, milord/milady. If I can interest you in one of our special drinks, you let me know."
"Is there something I do for you?"

When exiting conversation, Talen may say:

"If you'll excuse me, I have other things to attend to."

You can ask about the special drinks.

You mentioned you served special drinks?
"Three in fact. They're my own recipe. Brought them over here from my days as a bartender in Gideon."

The drinks are Elder Scrolls-themed:

He has a negative view of the Thieves Guild, as shown when he tells you about the Guild.

Tell me about the Thieves Guild.
"They're vermin... garbage. They're exactly what makes this city such a horrible place to live.
How appropriate they should live in the Ratway with the rest of the trash."
What's the Ratway?
"Disgusting. Ruined sewers filled with goodness knows what.
There's an entrance down by the canal, but I'd highly advise you stay out of there... its [sic] the Thieves Guild's territory."

During A Cornered Rat, you can inquire with Talen-Jei about your mission, saying that you're looking for an old guy, hiding out somewhere in Riften. He will direct you to the Ratway.

"Never heard of anybody like that. But if you want to hide out in Riften, the Ratway's where you'd be.
There's a sort of tavern down there, the Ragged Flagon. Where all the lowlifes in Riften get drunk and knife each other.
You might try there, if you can get through the Ratway alive."

To start Sealing the Deal, you must ask Talen-Jei how he met Keerava.

How did you meet Keerava?
"I met her when I wandered into Riften a few years ago. Been smitten with her ever since. In fact, I'm thinking of asking her to marry me.
In Black Marsh, tradition dictates we present a potential mate a unique wedding ring to represent our future bond.
I already have the gold band, but all I need are three flawless amethysts to complete the setting."

You can offer to find them for him.

I could find those for you.
"I was hoping you'd offer. I didn't think it was my place to ask such a favor of you. I thank you."

You can also politely decline to help.

Can't help you there.
"I understand. Hopefully I'll be able to save my meager earnings up to buy them one day."

I have them right here.
"I... I... I don't know what to say. Such kindness is unheard of in these times.
Here. I want you to accept this as payment for your sacrifice and I... well, we both thank you."

He will give you a random potion in return.

You can also ask Talen-Jei to tell you about the wedding ring.

Can you tell me about the wedding ring?

"Every Argonian wedding proposal band is supposed to have three flawless amethysts as part of their design.
Two of the gems, the ones on the outside, represent the couple to be married... one for the husband, one for the wife.
The amethyst in the center represents The Hist, the entity that all Argonians consider a sacred part of our lives."

When you give a religious pamphlet to Talen-Jei, he will be appreciative.

Here, brother. Blessings of Mara upon you.
"Interesting. I'll look it over. Thanks."

During Taking Care of Business, you can approach Talen-Jei for help. He will be less trusting than usual, however.

"What do you want?" You can now mention that he might want to talk some sense into Keerava, which will be replied to with "With the rumors going around about how poorly your Guild's been doing, she's become much too bold.
I'm not that foolish. The last thing I want is a war with your people."
Then help me convince her to pay.
"Look, I'm only telling you this because I care for her. Don't mistake this as acceptance for what you do.
Keerava has some family at a farm just inside of Morrowind. If you mention you know about it, she might just listen to you.
Just please, don't harm anyone. I couldn't bear the thought."

After the quest, he greets you with distrust.

"We got the message... now just take your business elsewhere."

When you idle or pass him by in the tavern, he may say:

Talen-Jei: "You have some nerve coming back here after what you did to Keerava."

Talen-Jei: "Just get out of here."

Talen-Jei can be seen talking with Keerava about their life in Riften:

Talen-Jei: "Keerava, we're running low on Black-Briar Mead."
Keerava: "If only Maven would stop raising the price on it maybe I could afford to stock more cases."
Talen-Jei: "We could always look for another brand."
Keerava: "That isn't an option. Maven sees me serve a competitor's brand here and we may as well dig our own graves."

They talk about their finances.

Keerava: "Don't worry, the time will come when we can walk away from here."
Talen-Jei: "I hope so. I can't stand this city anymore."
Keerava: "Damn it, Talen. We still don't have enough this year to get out of Riften."

They'll also talk about the Dragons.

Keerava: "Talen, do you believe what they're saying? Do you really think the dragons have returned?"
Talen-Jei: "I don't know what to believe. If it's true, then dark times may be upon us."
Keerava: "What should we do?"
Talen-Jei: "We hold each other close and hope that all of this ends well."

He can also be seen having random conversations with other guests at the Bee and Barb. One of these guests is Bolli.

Bolli: "Talen my friend, up for some fishing this week?"
Talen-Jei: "I don't know Bolli. It's getting dangerous outside the walls"
Bolli: "Oh come now, what's a dragon or two compared to a day full of fishing!"
Talen-Jei: "That's not funny, Bolli. People are scared."

Vulwulf Snow-Shod: "Talen! Another round!"
Talen-Jei: "I think you've had plenty, Vulwulf. Maybe you should head on home."
Vulwulf: "You stupid lizard! I said give me some more drink, or I'll have your head on a pike!"
Talen-Jei: "Suit yourself."

Maven's son, Hemming Black-Briar may also approach him with an "offer".