After you have read the letter you will need to return to the jarl. When you tell her that you have discovered the location of the skooma traders, she will ask that they "be destroyed once and for all", and entice you with the prospect of a title in Riften. This prompts an update of the quest to find the cave.

The cave is north of Riften, and northeast of Shor's Stone. There is a single bandit and two pit wolves outside the cave. The wolves should be inside the two leveled locked cages, but are sometimes found roaming the small camp. 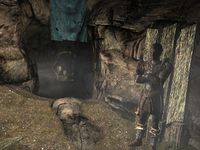 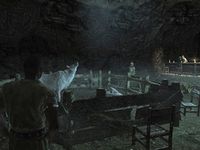 The wolf pit of Cragslane Cavern

Enter the cave to find a bandit standing guard near a lit lantern; after you ignore the warnings, or get too close, you will be attacked. Further down the tunnel and around the corner is the main gathering room of the suppliers. There are three gamblers, a barkeep, and a pit wolf in the first part, and a bandit, and two pit wolves locked in cages, in the second part.

Loot the barkeep for the Craglane chest key, and the second bandit for the Craglane dog cage key. Go behind the bar in the northwestern corner to find a leveled apprentice-locked chest, a bowl of moon sugar, two bottles of skooma, and a copy of the Lockpicking skill book The Wolf Queen, v1. The second part of the cave contains another leveled apprentice-locked chest with a bear trap in front of it, the two apprentice-locked wolf cages, and spread over the preparation area, a few ingredients, a bowl of moon sugar and seven bottles of skooma. There is also a set of miner's clothes, which are rare to find lying loose.

After two quests involving two fights, one of which descends into a large brawl, you have well earned a reward. Return to the jarl and she will reward you with a random enchanted weapon, and express her gratefulness, "Your continued efforts have been of great benefit to the people of Riften."

Additionally, if Maven Black-Briar is jarl, then following the eradication of the bandits in Cragslane Cavern, she will send her people to gather any remaining merchandise because "We can't have that substance falling into the wrong hands now, can we?" She will also reward you with some gold, stating that "this should suffice as your cut of the... or rather, a reward for your actions."