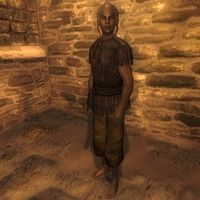 Valen Dreth is the first person you see in the game. He's the Dunmer prisoner in the cell opposite yours who taunts you. If you choose to join the Dark Brotherhood, you'll get your revenge later on in the Scheduled for Execution quest. For a relatively minor character, Valen has some of the most interesting dialogue in the game, though it depends on your race and gender.

Valen wears a sack cloth shirt and a pair of sack cloth pants. He also has a small amount of gold.

There are actually two different versions of Valen. The top set of stats are for the Valen that you first meet during the tutorial, the bottom set is the one that you kill during Scheduled for Execution.

If you select the first option, he will not become aggressive, as is the case with the others.

For those who don't want to start the game over with every possible combination of race and gender, here's a list of his quotes. Although he is very spiteful, during the related Dark Brotherhood quest he seems to "remember" things quite differently, asking you to help your old buddy out. 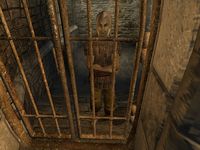 After his speech to you, upon hearing some people, he will tell you: "Hey, you hear that? The guards are coming... for you! He he he he he he."

When approaching near his guard cell, Dreth will have a conversation with an Imperial Guard:

After the guard has departed, Dreth will be yours for the killing. Instead of killing him right away, however, you can choose to have a 'fun' little chat with him just beforehand. Once he notices someone is near his cell, he will plead with them to release him: "You've got to get me out of here! Come on, open the door!"

When he sees your face, he will immediately recognize you: "Wait, I know you... You... You're the one! That day the Emperor was killed! They went through your cell! You lucky bastard! But... you came back? Come on, you've got to help me! Let old Valen out of this cell! You've got your freedom, now give me mine! What do you say, huh? Come on, friend!"

After this, you will have three dialogue options:

The Night Mother says goodbye. "The Night Mo.... No! No! Guards! Help me! Somebody help! Assassin!"
You're going to die in here. "What? You filthy little maggot! When I get out of here you're dead! You hear me? Dead!"
[Say nothing.] "What's the matter with you, huh? You some kind of mute or something? I saw you escape, now you're crazy enough to come back?"

The first one will cause him to panic and try to flee. The other two will make him angry. If you speak to him again afterwards, he will angrily state: "You dare torment me? Valen Dreth? Let me out of this cell, you fetid piece of Guar dung!" After this, he will become hostile and attack you, but he will be easy to kill.