Once you accept the contract, Vicente will tell you what needs to be done: "As I expected. Good. The target is a Wood Elf named Baenlin. You will find him at his home in Bruma. Enter secretly and avoid his manservant, Gromm. On the second floor is a secreted door leading to a crawlspace. Inside are the fastenings of a mounted head that hangs over Baenlin's favorite chair. Loosen the fastenings any night between 8:00 pm and 11:00 pm, and the head will surely fall on Baenlin as he relaxes in his chair, as is custom. If Baenlin is killed in any other manner, or if the manservant Gromm is killed, you will forfeit the bonus. Now go, and may Sithis be with you." You are now directed to go to Bruma and kill the target Baenlin in his own home. If you speak to Gogron or Teinaava before you leave, they will also provide an insight on his manservant, Gromm: "The manservant's name is Gromm, you say? Sounds like a Nord. Probably a big one. If he catches you, get ready for a serious fight." and "If the target is old and weak, as you say, then his manservant is sure to be quite the opposite. Best to stay out of his way." 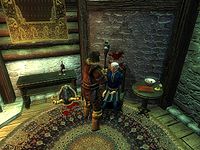 "...and the head will surely fall on Baenlin as he relaxes in his chair, as is custom."

When you arrive in Bruma, Baenlin's house is located just north of the eastern gate. If you spoke to Antoinetta beforehand, she'll give you some advice about how to enter the house: "How do you plan on entering this man's house? Through the front door? Be smart and look for a more inconspicuous way in, like a cellar entrance." Following her suggestion, you can find a door leading into the basement situated at the rear of the house, providing a safe and indirect access.

Once inside the house, sneak upstairs, enter the room closest to the stairs, and proceed into the crawlspace through the door hidden in the wall. The precarious fastenings are at the end of the crawlspace, but remember Vicente's directions: "Loosen the fastenings any night between 8:00 pm and 11:00 pm, and the head will surely fall on Baenlin as he relaxes in his chair, as is custom." Wait until it is between those times before you release the mounted head, which will fall on Baenlin in his seat, killing him instantly.

Sneaking out the same way you came, you will notice Gromm standing in front of Baenlin's dead body. Be careful not to attract his attention as he will now attack you on sight. Retreat through the basement and out into Bruma, then return to the Dark Brotherhood Sanctuary. Valtieri will comment on your completion of the contract. If you killed Baenlin in the manner requested, he will say: "So, the accident has been staged, and Baenlin lies dead. Well done! You have more than earned your reward and bonus." However, if you completed the mission in some other way, he will be disappointed: "Baenlin is dead, yes, but you did not fulfill the contract precisely as directed. I will grant your reward of gold, but the bonus is forfeit." He will then reward you with a leveled amount of gold (up to 600 gold) and an advancement to Slayer. If you successfully made Baenlin's death seem like an accident, you will receive the bonus reward Sufferthorn. You can now accept the next quest from Vicente, and the quest Scheduled for Execution will begin.