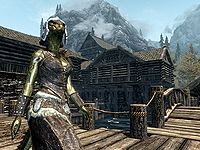 Once you reach level 14, a female Argonian named From-Deepest-Fathoms will appear near Riften Fishery, walking around in circles, manically talking to herself. When you approach her, she will tell you about a place called Avanchnzel and an item she refers to as "the Lexicon": "You. You must take the Lexicon. Free me of my burden." When you respond, she merely continues: "The memories. I cannot stand them. You must take them away, return them to Avanchnzel. You must take the Lexicon from me. Please... take it now." She will not provide any explanations and will continue rambling until you accept. She then hands you a strange, ornately-decorated cube, and will walk away with the words: "You must bring it to Avanchnzel, in the west. Return it to them. It must go back."

Avanchnzel is a large Dwemer ruin in southernmost Skyrim, in the Jerall Mountains, a long ways west of Riften and southwest of Heartwood Mill. The exterior of the ruin is quite large, promising a lengthy journey within. The entrance itself is a cave-like opening in the cliff rather than a Dwemer-crafted stone door. Immediately upon entering, the hidden power of the Lexicon begins to awaken, and you will hear ghostly voices echoing through the tunnels. When you reach the first chamber, you will encounter four ghostly figures: Drennen, Breya, Watches-The-Roots and From-Deepest-Fathoms, the same Argonian who gave you the Lexicon back in Riften. The conversation between them reveals that Roots is the leader, while he and Fathoms have hired Breya and Drennen. Drennen is clearly the newcomer and is already worried about what lurks within Avanchnzel:

The ghosts will then disappear without a trace. When you continue forward, you will notice a broken-down wall that leads into the actual ruin; clearly made by the ghostly adventurers. Inside the ruin, dwarven spiders immediately attack, so dispose of them and proceed through the empty halls until you reach a door.

The next chamber is the central chamber, with multiple levels and bridges leading up to plateaus above. Two ghosts will be present on the bridge, the young Drennen and the more experienced Watches-The-Roots. Roots clearly did his homework and tells Drennen the purpose of Avanchnzel: 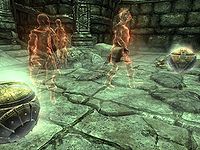 After this brief exchange the two ghosts will disappear, leaving you with two possible paths: east and south. Since the ghosts were heading south, pick that route and fight your way through numerous dwarven spheres as the path twists and turns, leading down like a spiral. When you reach the large central chamber again, you will find yourself on the level below the bridge, and you will be attacked by four dwarven spiders. Make your way to the very bottom and check out the door to the south for a bit of treasure, then follow the map marker to the eastern door. Here, all four ghosts are present again, curiously staring at some buzzing dwarven automatons:

When the ghosts and the machinery are gone, proceed down the corridor. There is an unlocked chest with some minor loot near the shell of the left hand Dwemer sphere. Collect it if you wish and then enter the next zone, the Avanchnzel Animoncultory. 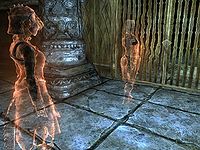 "I told you we should have hired a thief." 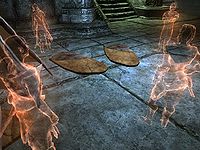 "Maybe we should turn back. I don't want to sleep here."

In the first chamber of the Animoncultory, you will yet again encounter the ghosts, this time trying to break into one of the many hidden chambers of Avanchnzel. At this point, it is clear the place is starting to get to them:

When the ghosts are gone, pick the lock for some minor loot, then proceed up the stairs and follow the tunnels to another large chamber with a tiny camp set up by the adventurers. Here, you will watch their growing frustrations with each other and the task at hand:

Head east from the camping area and follow the tunnel as it turns north. Beware the booby-trapped door to the east, as the spinning blades from the floor can kill you instantly. Turn around the corner and approach the northern side of the huge chamber with the camp. It contains a single dwarven spider, numerous dwemer artifacts on shelves, an alchemy lab, and some jewelry. From there, take the southern corridor, which leads one level down to another door. A dwarven spider and dwemer sphere guard the next room, and several locked doors lead to extra treasure. Keep moving in a western direction until you reach a chamber with yet another ghostly encounter:

Head down the southern corridor and open the door. A gigantic factory will appear before you, filled to the brink with dwarven spiders, as well as several dwarven centurions and spheres lying on tables, ready to attack if needed. With the exception of the spiders, none of them will attack, so locate the northern staircase and head down the slope to find the first evidence of what happened to the adventurers. 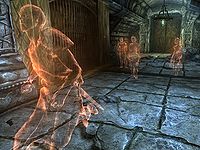 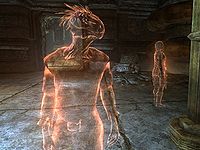 "Soon the Lexicon's knowledge will be mine."

At the foot of the slope, you will find the dead body of one of the ghosts: the young Drennen. Around the corner, you will see the ghostly version of Drennen finally lose it and run towards you, disappearing exactly where his body lies. His final words—"I can't do this. We shouldn't be here. I'm sorry."—will be largely ignored by his companions, who, unaware that Drennen died just after turning the corner, will decide to move on:

The three ghosts will then move on into the Avanchnzel Boilery, so follow them inside. There you will witness yet another conversation, where a seemingly-possessed Roots will claim he can hear the Lexicon calling: 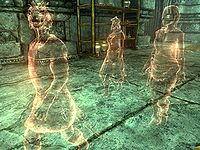 "I can hear the Lexicon. Come on. Quickly!" 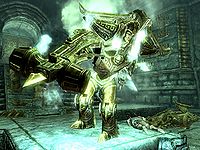 The End of the Road

Walk down the pathway and through the steamy tunnel. A dwarven sphere will attack along the way, and you will encounter a dwarven spider sitting on a set of shelves, shivering. In the next room, you will see Roots, Breya, and Fathoms carefully approaching a door at the end of the room. The obsessed Roots will say:

The three will then approach the door and Breya will shout, "Wait!" and Roots will cry out, "Aaaaaaaaaaa...." Behind the door, a set of pressure plates will transform the entire room into a deathtrap of nearly unavoidable spinning blades. At the bottom of the slope you will find Watches-The-Roots dead, obviously killed by the blades. You can turn off the trap with the handle near his body, then open the nearby door for the final showdown.

In the last chamber, Breya's body can be found dead near the pedestal, killed by the dwarven centurion lying next to her. Impressively, she appears to have killed one of them before dying herself, no mean feat. Unfortunately, there was one more centurion in the room; it is likely responsible for her death. As soon as you approach the pedestal, it will activate, intent on making you its next kill. After the battle, locate the Lexicon Receptacle in the middle of the room and place the Lexicon on it. Once it is in place, behold the sight of power and memories as it opens. Your reward for following in the footsteps of some unfortunate adventurers is the passive effect Ancient Knowledge.

To leave the ruin, open the western door; there is an unlocked boss chest in the darkness to your left as you approach the elevator, easily missed. Take the elevator up to the first zone, Avanchnzel, and fight a few enemies. Locate the door with the wooden bar to the north and escape out onto the Avanchnzel Balcony, an exterior area that provides a breathtaking view over Skyrim. To the right is a locked Apprentice level chest containing minor loot.