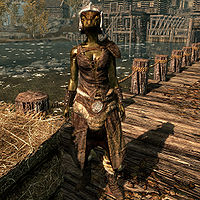 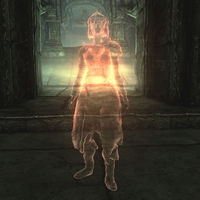 From-Deepest-Fathoms is an Argonian citizen who can usually be found wandering around Riften Fishery.

When first encountered, From-Deepest-Fathoms will engage you in conversation and tell you in an almost babbling manner that you must take the Lexicon from her and free her of her burden. She will go on to say that the Lexicon must be returned to Avanchnzel. If you agree to take the Lexicon back, the quest Unfathomable Depths will begin. Once the quest is completed, her sanity is restored.

From-Deepest-Fathoms wears a set of hide armor, including the helmet, bracers, and the boots. She wields an iron dagger and carries a belted tunic along with a selection of common loot and gold.

This Skyrim-related article is a stub. You can help by expanding it.
Retrieved from "https://en.uesp.net/w/index.php?title=Skyrim:From-Deepest-Fathoms&oldid=2224933"
Categories:
Hidden categories: