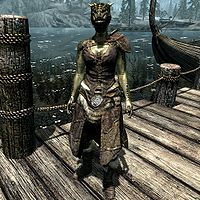 Deeja is an Argonian assassin. Prior to the related quest, she can be found at the docks of Solitude. Jaree-Ra and Gulum-Ei are her brothers.

Until the related quest has been started, Deeja will wander around the dock area all day, and may be found aboard the Red Wave at night.

Deeja wears a set of hide armor and a pair of hide boots. She wields a leveled dagger (up to Daedric quality) in combat, and carries lower-class loot and gold, as well as a spare belted tunic.

She is extremely rude to you and she will frequently respond to your attempts at conversation.

"You, talk to egg-brothers. Deeja has no words for you."

"You have no knowledge of who you speak to. Go away."

"You want knives? You want them in your belly? No? Then you stop talking to Deeja."
"Shoo! Go away! You get nothing from me."

"You bother me again, maybe you will not walk away. Understand?"

During Lights Out!, you will encounter Deeja at the Wreck of the Icerunner. You will need to kill her shortly after talking with her.

Before becoming hostile, she will initiate conversation.

"My brother told me you were coming. I'm supposed to give you what you've earned."
So we're splitting the loot, then?
"Ha! I'm afraid the loot's already been moved. You've been useful to the Blackbloods, though. You've earned a quick death."

She will then attack you.