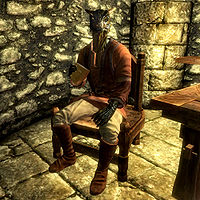 Gulum-Ei enjoys a bite to eat

Gulum-Ei (also known by the alias Gajul-Lei) is an Argonian dock-worker living in Solitude and employed by the East Empire Company to maintain their warehouse. He also made significant money on the side by co-operating with the Thieves Guild, who would pay him handsomely for select items lifted from the trading company's inventory. However, he has recently cut his ties with the guild, which has irritated Guildmaster Mercer Frey and aroused suspicion. Deeja and Jaree-Ra are his siblings.

Throughout the day, he can be found eating in The Winking Skeever in the alcove to the left of the bar.

Gulum-Ei wears merchant clothes and boots. He carries the key to the warehouse, a gem of varying quality, a leveled restore magicka potion and up to nine gold coins. He is armed with a leveled dagger (up to Elven quality) for protection and supplements this with four spells: Fast Healing, Ice Spike, Frostbite and Lesser Ward.

Before the related quest, he will curtly dismiss any attempt at conversation: "I have no business with you. Leave me.", "Go away. I have more important things on my mind right now.", and "I don't like strangers..."

During Scoundrel's Folly, Mercer Frey shed some light on Gulum-Ei when giving you your instructions. Gulum's old alias used by a Thieves Guild contact was "Gajul-Lei" He is the guild's inside man at the East Empire Company in Solitude. Mercer is willing to bet that he acted as a go-between for the sale of Goldenglow Estate, and that he can point you to the buyer. Inquire further and he'll tell you that Gulum-Ei used to get the guild merchandise from the East Empire Company, and they were making a hefty profit. Gulum-Ei got greedy and cut them out of the deal.

If you take Mercer's advice and contact Brynjolf you can glean some more information. You'll learn that Gulum-Ei is a stubborn scam artist, but he's no mastermind. He also says you're going to have to bribe Gulum-Ei. If that fails, follow him and use his actions as leverage against him.

When you first approach Gulum-Ei he is rather aggressive. "So, what do we have here? Hmm. Let me guess. By your scent, I'd say you were from the Guild. But that can't be true, because I told Mercer I wouldn't deal with them anymore."

I'm here about Goldenglow Estate.
"I don't deal in land or property. Now, if you're looking for goods, you've come to the right person."
You can drop the act now... Gajul-Lei.
"Oh, wait... did you say Goldenglow Estate? My apologies. I'm sorry to say I know very little about that... bee farm, was it?"
You acted as a broker for its new owner.
"Maybe I did, maybe I didn't. I can't be expected to remember every deal I handle."

His dislike for you is palpable by his remark when leaving him: "If you're the best the Guild's got, they're in worse shape than I imagined."

To get the information you want you'll need to either bribe or persuade Gulum-Ei, the latter being quite hard to do. Intimidation will achieve nothing, given his coarse skin.

What is it you want?
"I have a buyer looking for a case of Firebrand Wine. There just so happens to be a single case in the Blue Palace. Bring it to me, and we'll talk about Goldenglow Estate."

When you exit the conversation after bribing him, he says: "Do take care handling that case of wine... it's irreplaceable.", "Look, did you want the information or not?", and "No Firebrand Wine yet? How disappointing."

Once you return with the wine, he'll reward you with some soul gems: "Ah, I see you have the wine. Hand it over and we'll talk."

I have the Firebrand Wine.
"Good. Can't have the buyer getting impatient and looking elsewhere for this, can we? Here, take this. I certainly can't use it, but I suppose I need to pay you something for the goods."
You're trying to bribe me now?
"Not at all. I consider it an investment in prolonging my life. As far as Goldenglow Estate goes, I'll tell you what I know."
What about the information on Goldenglow Estate?
"I was approached by a woman who wanted me to act as the broker for something big. She flashed a bag of gold in my face and said all I had to do was pay Aringoth for the estate. I brought him the coin and walked away with her copy of the deed."
Did she say why she was doing this?
"Not at all. I tend not to ask too many questions when I'm on the job. I'm sure you understand. However, I did notice she was quite angry and it was being directed at Mercer Frey."
That's it? No name or anything?
"In this business we rarely deal in names; our identity comes from how much coin we carry."
I think you're lying to me.
"Look, that's all I know. I never promised you I'd have all the answers. Now, since our transaction is done, I'll be on my way."

If you exit the conversation before getting the information you need: "You needed to know more?"

After the conversation, he will leave to head towards the warehouse. If you try to talk to him while he's walking over there, he'll tell you to shove off: "Look, I've told you everything. Now leave me alone!", "Our business has concluded and you're standing in my way.", "Hmmm, you again. What is it this time?", and "You again? We have nothing else to discuss. Now move."

Once inside, he will make his way to the secret entrance to Brinewater Grotto, all the while nervously looking back over his shoulder. He may comment that he feels he's being followed: "Hey... is someone watching me?", "I swear, if I'm being followed...", "I swear I feel like I'm being watched.", and "Who's there?"

When he loses suspicion: "I don't have time to chase shadows, I've got better things to do.", "Must be my imagination.", "Damn ears... playing tricks on me again. Can't stand this sea air!", and "If this keeps up, I'm headed back to the Winking Skeever."

He'll press on further into the cavern. While following him, you may catch the resident brigands conversing rather deferentially about the Argonian. When you finally confront him, he's lost all his brazenness:.

"Now, there's no need to do anything rash... This isn't as bad as it seems. I was going to tell Mercer about everything, honestly! Please... he'll have me killed!"

You have three options: assuring him Frey won't find out, threatening to kill him or telling him to take his chances.

Mercer doesn't have to know.
"I see you wish to be reasonable, perhaps I misjudged you. The name of the person you want is Karliah."

Tell me first, and then I'll decide.
"All right, all right. It's Karliah... her name is Karliah."

Tell me now or I'll kill you where you stand!
"No, please! There's no need for that! I'll tell you everything. It's Karliah... her name is Karliah."

Either way, you'll get the name you needed: Karliah. If you ask him about her he'll be surprised you don't recognize it.

You say that name like I should know it.
"Mercer never told you about her? Karliah is the thief responsible for murdering the previous Guild Master, Gallus. Now she's after Mercer."
And you're helping her?
"Help... ? No, no! Look I didn't even know it was her until after she contacted me. Please, you have to believe me!"
Where is Karliah now?
"I don't know. When I asked her where she was going she just muttered "Where the end began." Here, take the Goldenglow Estate Deed as proof. And when you speak to Mercer, tell him I'm worth more to him alive."
I'm keeping the deed. Any objections?
"Consider it a gift to ensure your silence. That thing seems to be bringing me nothing but trouble anyway. Karliah didn't even want it, she wanted to keep the sale a secret. I can see how well that went."

If you promise to keep hush with Mercer he'll be delighted.

I'll keep quiet about your scam, but you owe me.
"Now you're speaking my language. Tell you what. If you need any stolen goods fenced, you bring them to me and I'll pay you good money for them. Consider me your new friend in the north."

You can also ask him why Karliah may have wanted to purchase Goldenglow Estate.

Why did Karliah purchase Goldenglow Estate?
"I asked her the same thing and she wouldn't come out and tell me. But now that I know who she is, I'd say she's trying to hit the Thieves Guild where it hurts."
How would that hurt the Guild?
"Maven Black-Briar needs Goldenglow's honey for her mead. She's been using the Guild to keep the Estate under her thumb. If the owner cuts the Guild out of the picture, he's cutting Maven out of the picture... which she can't afford. If I was Maven, I'd blame the Guild for weakening and not being able to handle the place."
Which makes Maven lose faith in us.
"Exactly. For the Guild to survive, they need Maven's support. This Karliah must have spent a lot of time and resources planning this."

As you leave, he bids you farewell: "Now you won't forget to tell Mercer I cooperated, will you?" and "Give Mercer my regards when you return to Riften."

You can of course kill Gulum-Ei, at which point you must identify his written confession, but this won't go down well with Mercer. Vekel on the other hand will be rather pleased.

If you kept him alive, once the Thieves Guild questline is over Gulum-Ei will happily fence stolen items for you:

"Ah, you're just in time. I got in a shipment of fine wares courtesy of the East Empire Company."
"Come to sell me something special, or did you just want to look through my merchandise?"
"Ah, you're back. I'm hearing good things about the Guild through the grapevine."
"Brought me more than some Firebrand Wine I trust?"

If you ask him how business is going, he'll be elated.

How's business?
"Working with the Guild again is the best decision I've ever made. Protection, respect and a constant flow of coin... it couldn't get any better. Best of all, there's no need to smuggle things quietly anymore. With the influence we have in Solitude, I can march it right out the front door."

When you exit the conversation, he says, "Just remember me if you get your hands on anything else."

If you've been expelled from the guild, he says, "Crossing the Guild was a bad idea. I'll buy goods from you after you settle your accounts."

This is the merchandise found in Gulum-Ei's Merchant Chest. These items are only available if purchased from the merchant; they cannot be pickpocketed or stolen. They are restocked every two days.