The UESPWiki – Your source for The Elder Scrolls since 1995
< Skyrim: Hints(Redirected from Skyrim:Carriage)
Jump to: navigation, search 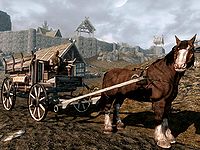 There are multiple methods of transport in Skyrim.

Walking is the slowest speed at which you will normally move. To walk, use the movement control appropriate for your platform. You cannot move faster than at a walking pace while you are overencumbered.

You will generally spend most of your time moving at a moderate run; running uses no stamina. You can also strafe or sidestep using the left or right "move" commands.

Sprint by holding the sprint control key (or toggle on/off for the Special Edition). Sprinting is significantly faster than running. As it consumes stamina, you can only sprint for a limited distance. You will generally exhaust your stamina more quickly when sprinting in heavy armor or when wielding a heavy weapon.

Walking or running backwards is slower than going forwards, and you cannot sprint backwards or sideways.

Movement Speeds by Method and Conditions[edit]

Also see information on falling, which can hurt or kill you.

As part of the Dragonborn DLC, you can ride a dragon once you have acquired all three words of the Bend Will shout. For more information see Dragon Riding.

As you cannot steer a dragon while riding it, the main functionality of this method of transportation is for fast travel.

You can travel much faster on horseback than on foot. You can also ride a horse while overencumbered for normal or fast travel. For complete information see Horses.

Carriages will carry you between the nine capital cities of each hold in Skyrim for 20-50 gold. They are the fastest means to get to cities which you have not yet discovered - although in the plain game, they are only available in the five major hold capitals: the four smaller hold capitals can be the destination but not the origin of a carriage journey.

With the Hearthfire add-on, homestead carriages also provide transport from the three homesteads to Darkwater Crossing, Dragon Bridge, Ivarstead, Karthwasten, Kynesgrove, Old Hroldan Inn, Riverwood, Rorikstead, Shor's Stone, and Stonehills. There is no charge for these services beyond the initial cost of hiring the carriage driver.

When first arriving at one of the five major hold capitals, you can speak with the carriage operator for some local information. Carriages will not operate when you are overencumbered.

The carriage drivers are:

Three ferrymen are added by the Dawnguard add-on and can transport you between three coastal cities for 50 gold, or to Icewater Jetty for 500 gold. You can also take a self-service ferry between Icewater Jetty and Volkihar Keep.

With the Bittercup Creation, you may have to ask Harlaug to bring you to the island of Giant's Tooth. He will continue to offer transport to the remote island for 50 gold.

The map in Dead Man's Dread

With the Dead Man's Dread Creation, you will have the opportunity to acquire the Dead Man's Dread, an ancient pirate ship that serves as a player home. Once you have claimed the ship as your own, a map inside allows for instant sea transportation. This map will bring you to Solitude, Dawnstar, or Windhelm. You will also unlock the ability to travel to Volkihar Keep (or rather, Icewater Jetty) and Raven Rock once you have discovered these places. This mode of travel is one-way.

You can fast travel from any exterior location to any location marked on your in-game map and which you have discovered (visited). Discovered locations are indicated on your map or compass with light-colored markers. Dark-colored markers, on the other hand, are places you have had marked on your map but have not yet discovered yourself, and therefore are not available for fast travel. Although fast travel transports you "instantly", a more "realistic" amount of game time will have passed upon arrival; however, such elapsed travel times are the same whether on foot or horseback.

With the Dragonborn expansion, fast travelling while riding a dragon transports you almost instantly in game time.

You cannot fast travel when near any hostile enemies, when overencumbered (unless you are on a horse), nor when falling, jumping, or during the animation of mounting a horse. Fast travel is totally disabled when playing in Survival Mode, except while riding a dragon.