The UESPWiki – Your source for The Elder Scrolls since 1995
< Elder Scrolls Online: Quests: The Clockwork City / Story Quests
Jump to: navigation, search

While meandering in Mournhold's City Center by the merchants or loitering near the Clockwork Crossroads Wayshrine, you may encounter a Dunmer mage by the name of Eldrasea Deras. Speak with her and she'll introduce herself as a servant of Divayth Fyr, one of the oldest sorcerers in all of Tamriel. Divayth Fyr is looking for someone to accompany him on a quest to find a powerful Daedric Artifact, and Deras has been tasked with finding and receiving you as his partner. Alternatively, if you have completed the Of Knives and Long Shadows prologue quest, Lilatha will appear in a projection to contact you. It is also possible to speak to Lilatha immediately after completion of the prologue quest while still on Dranil Kir.

A mage called Divayth Fyr is apparently requesting your presence. After speaking with her and accepting the quest, make your way over to the Tribunal Temple in Mournhold and head inside.

Regardless, you agree to help him out. He asks you to meet him at the waterfall north of the city. Head over to the waterfall Divayth Fyr mentioned and speak with him. It's north of Mournhold, right behind the Temple. Once you've reached the waterfall, Divayth beckons you over. Walk through the waterfall, and you'll find yourself in a crevice with a door. Follow Divayth Fyr into the cave.

Journey to the Clockwork City[edit]

Follow Divayth Fyr through the cave. You'll eventually find yourself in an elevator. Activate the lever and descend to Seht's Vault. A group of strange metal humanoids appear to recognize Divayth Fyr. The mage tells you to prepare yourself for what's to come, and instructs you to touch the orb in the center of the cavern.

You touch the sphere and find yourself shrunk down and transported into the sphere. The moment you arrive, it becomes clear that something is amiss. Divayth Fyr seems off-put. He intended for you to reach a place called the Brass Fortress, but it appears you've ended up in the wrong place. Divayth Fyr's Shadow abruptly splits from its host and runs off. He begins to panic, yelling for you to chase after it.

The factotums along the wall begin to awaken, and they proceed to attack you. Without his shadow, Divayth Fyr has been weakened, so he can only provide minor healing for you. Enter the Scrubbing Bore. There are blade traps littering the area. Divayth Fyr is nothing without his shadow, so he asks you to find a way to deactivate the traps so he can get through.

Here you have the possibility to speak to Divayth and ask him some questions, although he is rather impatient:

Navigate the Bore and flip the switches you find along the path to deactivate the traps. From the entrance, head left and follow that path. The switches will be in your way and easily flippable. To avoid the swivel-sword traps, stick to the wall. Be mindful of their positions, and hug the wall when they approach. For the swinging ceiling axe traps, watch the axes' swings and time your movement so that you slink past each blade in the pause between each set of swings. Swing, swing, pause: slink on past. Rinse and repeat. Deactivate the traps and move on with Fyr in tow.

Navigate the Forge and enter the Pneumatic Approach. Here, you will confront Divayth Fyr's shadow. Again Divayth Fyr provides healing, as he's been doing throughout this whole adventure since losing his shadow. Defeat the Shadow. 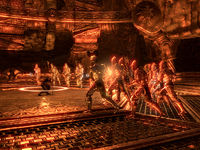 "More ridiculous machines? I've had enough of this!"

Divayth Fyr waves his hands, channeling a spell while chanting. His shadow conforms to his movements, and he walks into the gooey thing, reattaching it to himself. As Divayth Fyr starts to get sentimental about his shadow, a sizeable group of factotums appears, and begins moving towards you. Fyr drives his staff into the ground and destroys the factotums in a flurry of flames.

You've finally arrived at the outskirts of the Clockwork City. Fyr instructs you to head north along the path and meet him at the Brass Fortress.

Head to the gates of Brass Fortress. Right at the gates you will be stopped by a slightly hostile clockwork mage, Proctor Luciana Pullo. She doesn't seem to like Divayth Fyr very much, as is obvious by the way she greets him. Speak to Luciana, who will be rather suspicious of your intent. She says that only citizens are allowed within the fortress. When asked about how to become a citizen, the good Proctor tells you that you must secure an endorsement from a citizen in good standing. She leaves the task of finding a sponsor to you. Reminding Fyr to behave, Luciana takes her leave.